Jews, Muslims and Christians clean and document graves at Protestant cemetery that was vandalized two years ago. 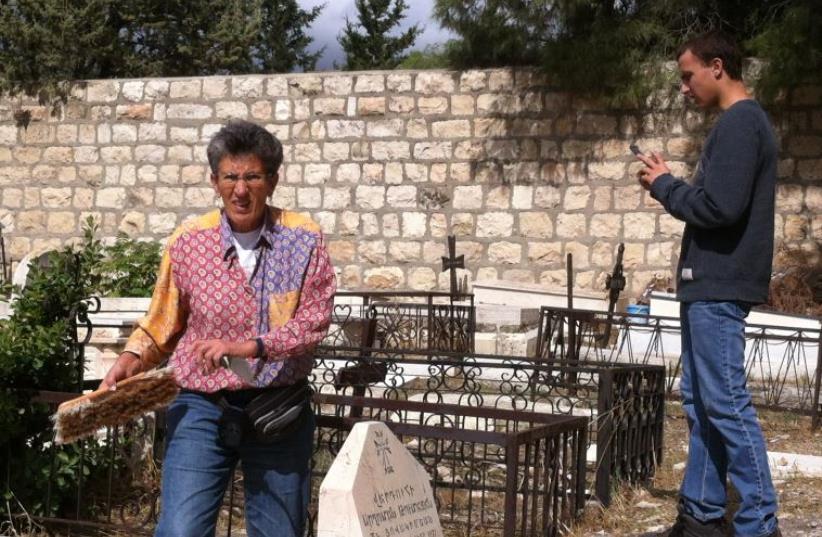 Interfaith delegation cleans Mount Zion graves
(photo credit: Courtesy)
Advertisement
Just down the road from the Temple Mount, which has been a flashpoint for violence in recent weeks, people of all faiths and nationalities joined forces Friday to clean and document tombstones at cemeteries on Mount Zion. The initiative was launched two years ago by academics, interfaith dialogue groups and tour guides, after the Protestant cemetery was desecrated and vandalized, and some of it tombstones smashed.Several important historical figures are buried on Mount Zion, such as Jerusalem architect and scholar Conrad Schick and Righteous Gentile Oskar Schindler. The initiative is led by Yisca Harni, a researcher of Christianity, who worked with church leaders to garner approval for the project from the Armenian Patriarchate of Jerusalem and the Franciscan Order. The group seeks to preserve and document, in every way possible, the human heritage associated with the Temple Mount-- Christian, Muslim and Jewish -- and to emphasize the diverse faces of Jerusalem, its landscape and its population - and its potential for creating interfaith and intercultural dialogue.The project is also running in cooperation with MyHeritage, using the Billion Graves app to digitally preserve and place the graves on an online map with their GPS locations.Some 100 people worked together on the project on Friday, including a delegation from Holland, alongside Muslim, Jewish and Christian Israelis, as well as students from the Armenian high school, students from the Catholic Terra-Santa School and the Jerusalem Pre-Military Leadership.Orit Ramon, one of the project's initiators, remarked: "It was wonderful to see them all working together, particularly now, during these difficult times." sign up to our newsletter