We have to change our approach, Father Gabriel Naddaf says. 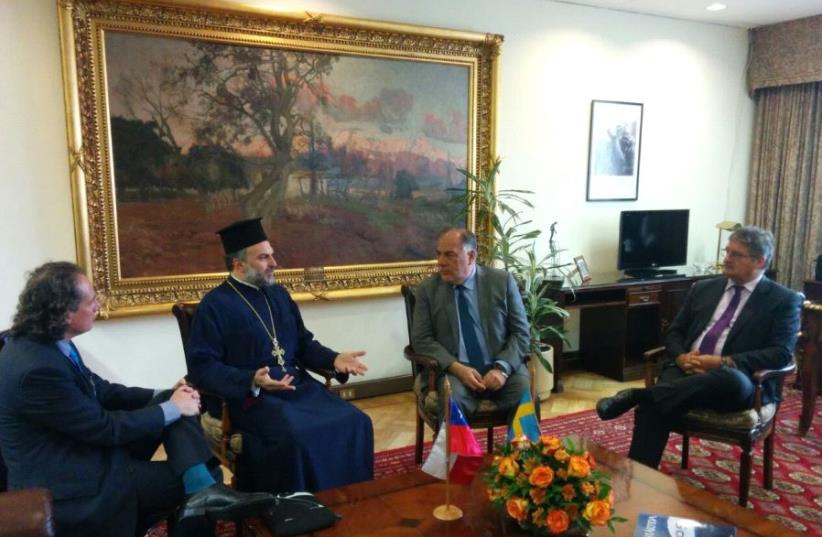 Father Naddaf meets last week with Osvaldo Andrade (second right), the head of the Chamber of Deputies, Chile's lower house of Congress
(photo credit: JNF-KKL CHILE)
Advertisement
Palestinians in Chile threatened to boycott a local Christian organization over a scheduled meeting with the Israeli Christian-Zionist leader Father Gabriel Naddaf. Last week, Naddaf, the head of the Christian Empowerment Council, was on a tour of the South American country, sponsored by the local JNF-KKL chapter and the Zionist Federation of Chile, to speak out against the Boycott, Divestment, Sanctions movement. He was scheduled to meet with the leaders of ACN-Chile, a Catholic charity organization, and with the head of the Benedictine Monastery in Santiago. However, Palestinian groups said they would take action to financially harm the Christian groups for meeting with the Israeli representative against BDS. The Christian organizations eventually bowed to the pressure and canceled the meeting. “We must never surrender to extremists, and with all the love we have, we must not give up hope, but we must be smart,” Naddaf, the next day, told a group of religious leaders, the head of Chile’s Jewish community and members of the Chilean government, about the threat of the boycott. “We must not bury our heads in the sand and simply toss out pleasant-sounding slogans. We have to rise up and take action. We are the silent majority and it is the extremists who are taking all the actions. And now is the time to change our approach.”Naddaf, who encourages Christian Israelis to enlist and integrate into the larger Israeli society, said that the religious leaders need to get deeper into the hearts and minds of the common people in order for them to make a difference for the good.Chile is home to about half a million Palestinians, most of them Christian, who immigrated when the Ottomans ruled the Holy Land. They have a large influence on all sectors of life in the country, and the Chilean-Palestinian community is believed to be the largest Palestinian community outside of the Arab world. The Palestinian Federation of Chile has been a major supporter of terrorist organizations such as Hezbollah and Hamas. It has also been leading the charge in the anti-Israel BDS movement, and has sponsored many antisemitic events against the small Jewish community of 15,000 people. Naddaf said there needs to be laws that punish those who incite hatred and support terrorism, and there needs to be a better system to monitor the finances of human rights organizations to prevent their money from going into the wrong hands. Naddaf stated that the Chilean government should monitor the funds Chilean Palestinians donate in order to ensure they aren’t transferred to terrorist organizations.He also said the Chilean Palestinians’ hatred toward Israel was misdirected.“They need to ask their ancestors why they left for Chile?” Naddaf said. “They weren’t running from Israel, which wasn’t established yet, they were running from the Ottoman rule.”Meanwhile in the Middle East, Naddaf said, there is a holocaust happening against the Christians, and the world is silent, instead only focusing on Israel, the only democracy in the region and the only place in the Middle East where the Christian population is growing. Naddaf also met with other lawmakers and pro-Israel lobbyists, to whom he gave his book “A Christian Guide to the Anti-Israel Boycott Movement.”To learn more about the role of the Bible in history and the roots of Christian Zionism, check us out at @christian_jpost, on Facebook.com/jpostchristianworld/ and see the best of the Holy Land in The Jerusalem Post - Christian Edition monthly magazine.sign up to our newsletter