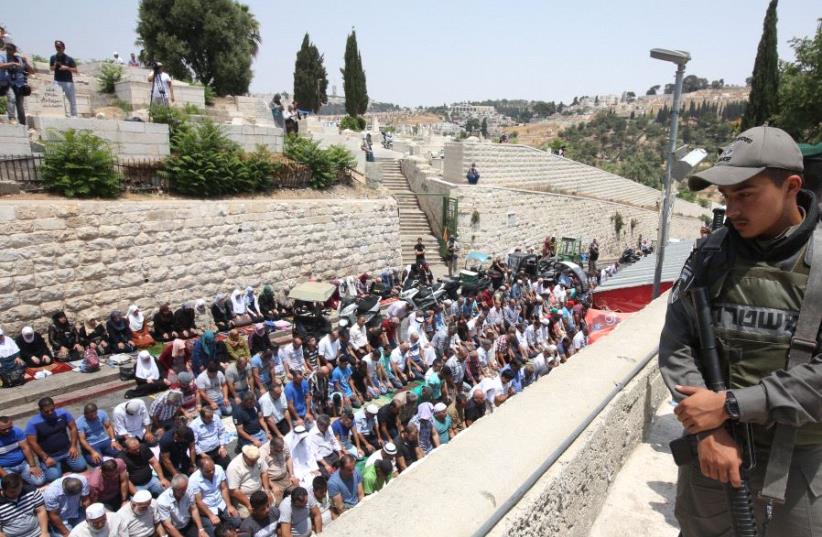 An Israeli soldier looks over a massive prayer session outside the Lions' Gate in Jerusalem, July 2017
(photo credit: MARC ISRAEL SELLEM/THE JERUSALEM POST)
Advertisement
A Christian organization promoting Israeli-European cooperation blasted international Christian institutions for blaming Israel for the recent Temple Mount tensions.
“It is simply wrong to blame the Israeli government for wanting to protect those entering the Temple Mount after the recent killings,” European Coalition for Israel Founding Director Tomas Sandell said Monday night. “Metal detectors are today a part of standard security procedures at holy sites in the world, from the Vatican to Mecca. These measures are put in place simply in order to protect people and are not meant to deny anyone access.”
Sandell’s remarks came in wake of various statements from Christian institutions around the world, including the Vatican and the World Council of Churches in Geneva, pleading for calm and asking Israel to stop inciting to violence.
In a statement from WCC on Friday, Secretary-General Olav Fykse Tveit called upon the Israeli government to immediately remove the metal detectors, thereby putting the blame for the latest wave of violence on Israeli security measures and not on the Palestinian incitement to violence.
The Geneva-based organization, which is said to represent millions of Protestant Christians, has a long history of anti-Israel bias.Recently, WCC published on its website a statement from its member churches in the Palestinian territories in which the Balfour Declaration of 1917 was described as “unlawful” and “marking 100 years of oppression,” thus rejecting any rights for the Jewish people to live in their own state in their ancestral homeland. These rights, Sandell said, were clearly established under international law in San Remo already in 1920. The Palestinian churches further urged WCC to step up efforts to boycott Israel, which it calls “a colonial apartheid state.”
The European Coalition for Israel also noted that event though WCC has been very outspoken about the Israeli-Arab conflict in the past, the organization hasn’t issued any statements on the recent UNESCO resolutions that denied any Jewish or Christian history in the Holy Land by declaring heritage sites, such as the Tomb of the Patriarchs, the Temple Mount and the Western Wall, as exclusively Muslim holy sites.
WCC was recently part of a new UN action plan in New York to enable religious leaders to contribute to the prevention of incitement to violence. The UN action plan was developed in response to an alarming rise in recent years in hate speech and incitement to violence against individuals or communities, based on their identity. Incitement to violence, in public discourse and the media, is both a common warning sign and a precursor to violent crimes and terrorism.
The UN action plan is the first document to focus on the role of religious leaders and those with such influence in condemning incitement to violence that could lead to such atrocious crimes as we have recently seen, and is the first attempt to develop context-specific regional strategies with this objective.
The call echoes a recent United Nations action plan from July 14, which encourages religious leaders to condemn incitement to violence and recognizes the strategic role that the religious leaders can play in times of conflict.
Sandell urged WCC and other religious leaders who signed the UN action plan to immediately comply with the new initiative by condemning any further incitement to violence and thus really help to defuse tension on the Temple Mount
sign up to our newsletter