Christian lawmakers from around the world confer in Jerusalem 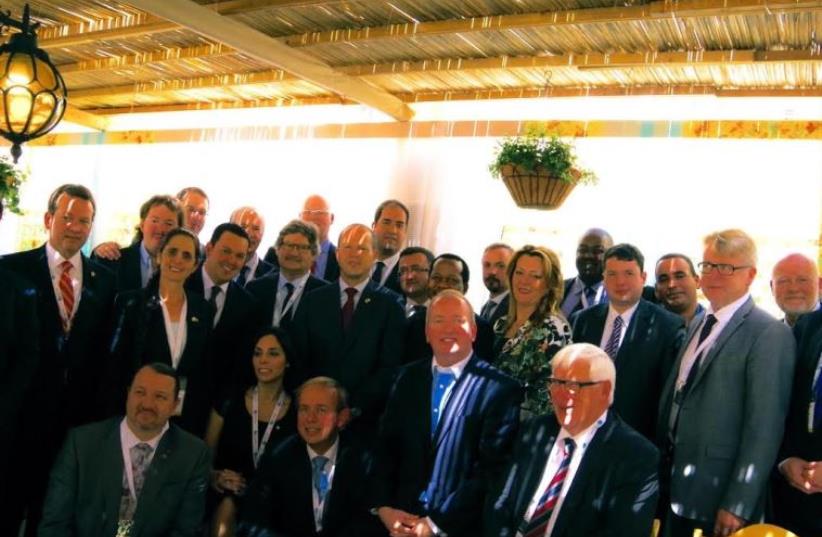 Visiting Christian lawmakers
(photo credit: ISRAEL ALLIES FOUNDATION)
Advertisement
Twenty-two parliamentarians from 18 countries gathered in Jerusalem Tuesday to discuss their part in deflecting threats to Israel.The lawmakers attending the Israel Allies Foundation’s three-day Jerusalem Chairman’s Conference came from the UK, Italy, Slovakia, Holland, Greece, Hungary, Czech Republic, Greece, Finland, Canada, South Africa, Uganda, Guatemala, Uruguay, Dominican Republic, Brazil, Chile and Paraguay, to discuss fighting boycotts of Israel, the threat of nuclear Iran to Israel and the Western world and how to keep Jerusalem as Israel’s undivided capital.“Complaining about hatred and darkness is not the way of the Israel Allies Foundation.We try to locate parliamentarians of good faith in each parliament to light a torch for Israel against hatred, discrimination and boycotts,” foundation president and former minister Rabbi Benny Elon said at the conference’s opening.The MPs met with their Israeli counterparts, including Christian Allies Caucus chairman MK Robert Ilatov (Yisrael Beytenu), deputy chairman MK Yoel Hasson (Zionist Union) and MK Anat Berko (Likud).Ilatov addressed the wave of migrants hitting Europe, saying that the migrant issue is international.“The European Union is currently dealing with it, but in the past, the EU funded organizations that supported and called for the absorption of refugees in Israel,” he said. “There is no escaping it – Europe and the EU have to actively intervene in the conflict in the Middle East to stop harm to innocent people that the migrant problem is creating.”Berko, an internationally respected expert on terrorism, warned that there are terrorist sleeper cells in Europe from around the world.“I think that the terrorist attacks on London and Paris and the 9\11 attack are only the introduction to what will happen in Europe if the sleeper cells are not taken care of,” she stated.The MPs had lunch with Jerusalem Mayor Nir Barkat, who said that “the majority of Israeli Arabs in Jerusalem want to remain in a united Jerusalem as the undivided capital of Israel.”They also heard a lecture about BDS (Boycott, Divestment and Sanctions Movement against Israel) by international law expert Professor Eugene Kontorovich and had dinner with Social Equality Minister Gila Gamliel (Likud), a former chairwoman of the Christian Allies Caucus.In the next two days, the parliamentarians will go on a tour of Judea and Samaria and meet Arabs and Jews who work together in the Rami Levy Supermarket in Sha’ar Binyamin.They will also meet with Bat- Galim Shaer, the mother of one of the three boys kidnapped and murdered by Hamas last summer.On Thursday, they plan to meet with Public Security Minister Gilad Erdan, who also holds the anti-boycott portfolio.The MPs will draft and sign a resolution declaring their support for Israel and “vowing to take a stance against racist, anti-Israel movements such as BDS,” and present it to Erdan.
sign up to our newsletter