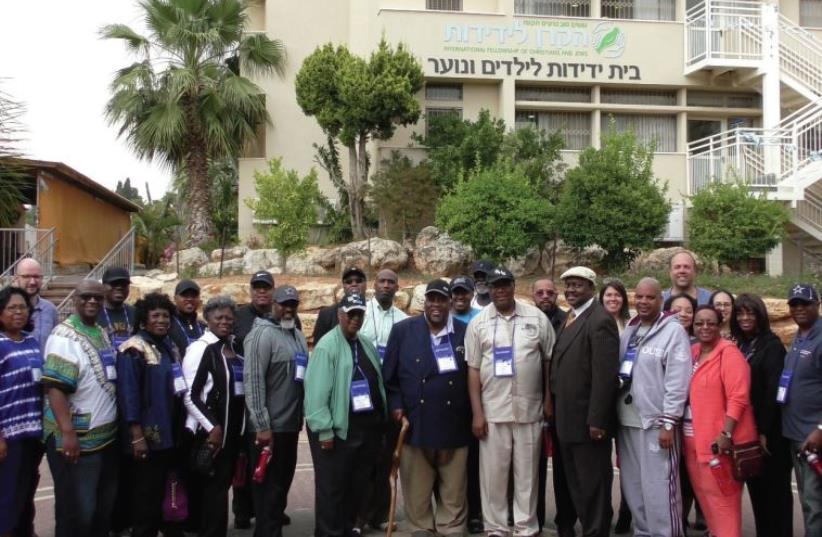 Leaders from the National Baptist Convention of America visit the International Fellowship of Christians and Jews’ Neveh Michael Children’s Home in Pardes Hanna this week.
(photo credit: COURTESY IFCJ)
Advertisement
A delegation of 26 leaders of the third-largest African-American Christian denomination is currently participating in an educational trip to Israel in partnership with the International Fellowship of Christians and Jews to strengthen the African-American leadership’s connection to the country.The National Baptist Convention of America is a predominantly African- American church with three and- a-half-million adherents in 4,600 churches in the US.Yael Eckstein, senior vice president of IFCJ, said the visit is part of the organization’s effort to “build strategic friends and allies for the Jewish people both financially and politically,” with an emphasis on combating the Boycott Divestment and Sanctions campaign against Israel.“Just by seeing the country and experiencing is something which can build a greater connection with Israel,” said Eckstein.“I hope that sooner rather than later it will be synonymous to be African- American and stand with Israel and the Jewish people like it is for white Evangelicals,” she added, noting that the current visit is the third such mission IFCJ has organized in the past 12 months.Rev. Samuel C. Tolbert Jr., the president of the National Baptist Convention of America, one of the leaders on the current trip, said that the African-American experience and the struggle for civil rights could help provide insight and a way forward to resolving the Israeli-Palestinian conflict.“How do we hear what the Palestinians say, how do we hear what the Jews say, how can we partner with them both and help find the common ground to help them live in more peaceable society,” Tolbert told The Jerusalem Post, noting however that achieving this goal depends on the parties involved.The reverend said that the trip had made him “more positive about what is taking place in Israel,” saying that his impression of the country was now much better than that which he had obtained from the media.“I think its going to make an impression on the church leadership, its going to have a lasting impact,” he said.IFCJ founder and President Rabbi Yechiel Eckstein said, “We are honored and humbled to host the NBCA in Israel.“This important educational mission will not only deepen the powerful connection between Christians and Jews and strengthen the African- American leadership’s bonds with Israel, but will remind all of Israel, and the Jewish people, that we do not stand alone,” he said.
sign up to our newsletter