Christian sect killings in Angola shrouded in fear and mystery

Police said the raid came after nine police officers were killed by the sect, an offshoot of the Seventh-Day Adventist Church. 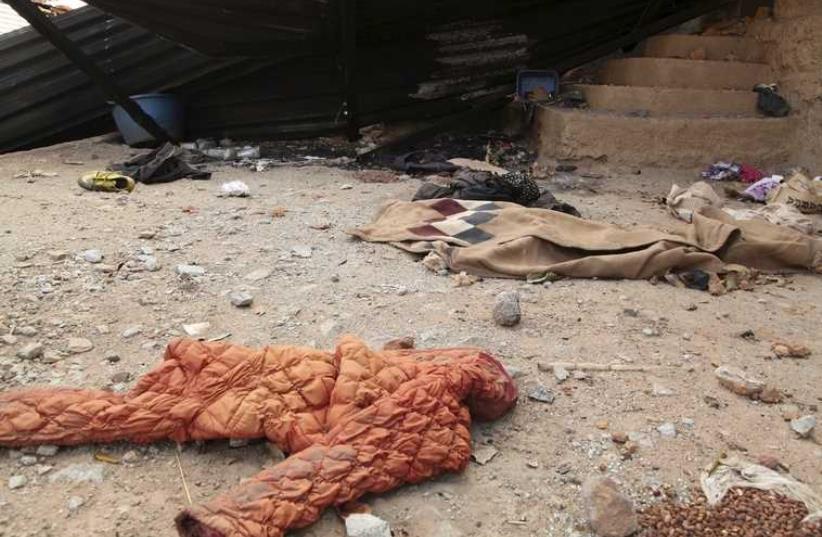 The Angolan police said 13 "snipers" from "The Light of the World" were killed during a raid targeted at capturing the sect's rebel leader Jose Kalupeteka, a popular anti-authority preacher who says the world will end on Dec. 31.
(photo credit: REUTERS)
Advertisement
The only traces of thousands of Angolan Christian sect members who were camped in these hills are burnt-out vehicles, shacks pocked with bullet holes and bloodstains in the soil.The details of a police raid on April 16 in the remote hills of central Huambo province have been fiercely contested, sharpening the divide between the ruling MPLA and the main opposition party UNITA, which fought on opposing sides in a 27-year civil war that ended in 2002.It has also raised awkward questions about the government in Africa's second-largest oil producer, which spent $6.5 billion on defense in 2013, the biggest slice of its budget and more than any other country in sub-Saharan Africa.The Angolan police said 13 "snipers" from "The Light of the World" were killed during a raid to capture sect leader Jose Kalupeteka, a popular anti-authority preacher who says the world will end on Dec. 31.Kalupeteka was arrested during the raid in the Sumi hills, 25 km (15 miles) south of Caala in the central Angolan highlands, a UNITA stronghold. He was paraded in front of the media in a yellow prison jumpsuit on Tuesday.Police said the raid came after nine police officers were killed by the sect, an offshoot of the Seventh-Day Adventist Church. President Eduardo dos Santos' government accuses the group of mistreating its members by encouraging them to live in seclusion and defy Angola's laws.UNITA and human rights activists say, however, that more than 1,000 civilians were killed by the police and military in a siege aimed at crushing a group that has defied the government.Police Commissioner Elias Livulu said only 13 were killed and anyone with evidence to the contrary should produce it."I challenge the person who said that to be urged to locate these 1,080 people killed. Because this is a serious accusation," Livulu told state television.The MPLA-led Huambo provincial government allowed no access to the hills for two weeks after the clashes, making it difficult to speak to any witnesses or sect members."I DON'T KNOW WHERE THEY ARE"Residents estimate at least 3,000 members of the sect had gathered for a religious meeting before the police raid."I have not seen anyone who lived there since the incident took place," one local resident, who asked not to be named, told Reuters during an May 3 visit, organized by local government, to areas hit by violence. "I don't know where they are."Nearby, a soldier wandered through a hillside village where makeshift metal shacks had been burned and looted, clothes were strewn on the ground and pots of food abandoned.Local human rights activist Angelo Kapwatcha said in a report that the raid involved hundreds of police and soldiers armed with machine guns, mortars and rocket-propelled grenades, according to a military source he interviewed.Some members of the sect were singing songs and shouted "our weapon is the Bible" and "Jesus is our protector" during the siege, the military source told Kapwatcha.Rights activist Raphael Marques de Morais wrote in a May 1 article in The Guardian that military sources told him houses were burned down with people inside and sect members were "mown down indiscriminately, many of them praying to the end."De Morais, who faces trial on charges of defamation due to a 2011 book that alleges links between Angola's military rulers and the "blood diamonds" trade, said his sources told him mass graves were filled in nearby villages.During a brief and controlled visit to a small part of the affected area, Reuters saw no evidence of burials.UNITA said it wants an independent investigation, possibly by the United Nations. Huambo Provincial Governor Kundi Paihama told Reuters he had no plans to investigate the clashes.RELIGIOUS CRACKDOWNThe Angolan government has in recent weeks been banning church groups, drawing criticism from rights groups who say the MPLA wants to monitor and control faith in a country of 21 million people where religion is influential.Kalupeteka's popularity is demonstrated in Internet videos of outdoor sermons that show thousands of followers, including women and children, sitting on packed dusty hillsides."Mr José Kalupeteka was a bad man," Huambo provincial government spokesman Tony Mendes told Reuters during the visit to the Sumi hills."After the governor told him to close this site down he did so for a while. But then he returned here, reopened the site and challenged the government once more," Mendes added.Angola, which has been ruled by dos Santos for 36 years, has been trying to rebuild its reputation following the civil war and is currently a non-permanent member of the U.N. security council.Dos Santos' opponents, however, say he is more interested in using force to maintain his grip on power than rebuilding the poverty-stricken southern African country."President dos Santos needs to review how his legacy will be framed," said Paula Roque, senior analyst at Crisis Group."The April 16 clashes can be construed as an opportunity for the government to begin its own investigation and hold its security officers accountable, or it can proceed with a cover up that will only fuel frustrations and dissatisfaction." sign up to our newsletter