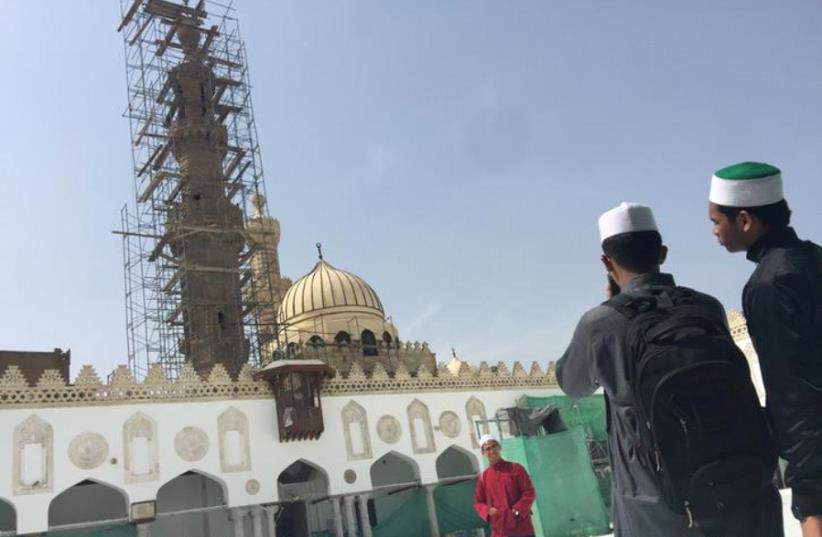 Students take pictures at Al-Azhar mosque as restoration work is conducted ahead of Pope Francis’s visit, in Cairo on Wednesday .
(photo credit: REUTERS)
Advertisement
Speaking at an Egypt peace conference, the World Council of Churches general secretary said Christians and Muslims must learn to live together in peace. “We believe in one God that has created one humanity to live together with its diversity and differences,” Rev. Dr Olav Fykse Tveit said at the Al-Azhar International Peace Conference on Thursday. “We are here to share our reflections and commitment to show together what we believe this means in practice. Together we should call for the care of the life of everybody created by God. We are accountable to the creator when we meet one another as God’s creation.”Pope Francis also attended the conference, which is also taking place Friday, and is three weeks after the attacks on the Coptic Churches in Egypt on Palm Sunday, which killed 45 people. More than 300 Muslim, Christian and political scholars and leaders were invited to the two-day event by Prof. Dr Ahmed al-Tayyeb, grand imam of Al-Azhar mosque and university. Chosen as grand imam of Al Azhar in 2010, Tayyeb is an outspoken advocate for interreligious dialogue and peace, as well as a strong critic of religious extremism.“Citizenship and peaceful co-existence are the greatest challenges that have to be focused on and built upon to counter fanaticism, terrorism and baseless theological claims and conceptualizations,” Tayyeb said. “Citizenship is the major guarantee for achieving absolute equality in rights and duties.”Tveit said religious leaders have a special responsibility to elevate the sanctity of the life of all human beings created by God. “As communities of faith we are called to show this as love to one another, in relations of respect and care to everybody,” Tveit said, adding that “Violence in the name of religion cannot be done without violating the values of religion. Violence in the name of God towards those who are created in the image of God becomes violence against God. We are from the beginning to the end accountable to God.”Christians and Muslims represent about half the world’s population, he said, “So as we are here, we are not talking about only ourselves.”“We are talking about humanity in many ways,” he said. “We should address these questions from a basic theological perspective. What does it mean to believe today in one God that created the one humanity?”He also emphasized that, because humans are accountable to God, they have to see how that leads to an accountability to every human being. “This is our mutual accountability to one another, to every human being, whatever belief or non-belief we have,” he said. “I think this is a very important reflection, working jointly toward equal citizenship. It is not only a political or a legal principle; it is also a principle that expresses our deepest faith in one God creating the one humanity.”Participants also visited the Coptic Cathedral and the Anglican Church in the heart of Old Cairo. Pope Francis is expected to address the conference on Friday.
Sign up for our Christian World newsletter >>