Quake killed at least 9 people and injured more than 90, none of whom were from Bnei Menashe. 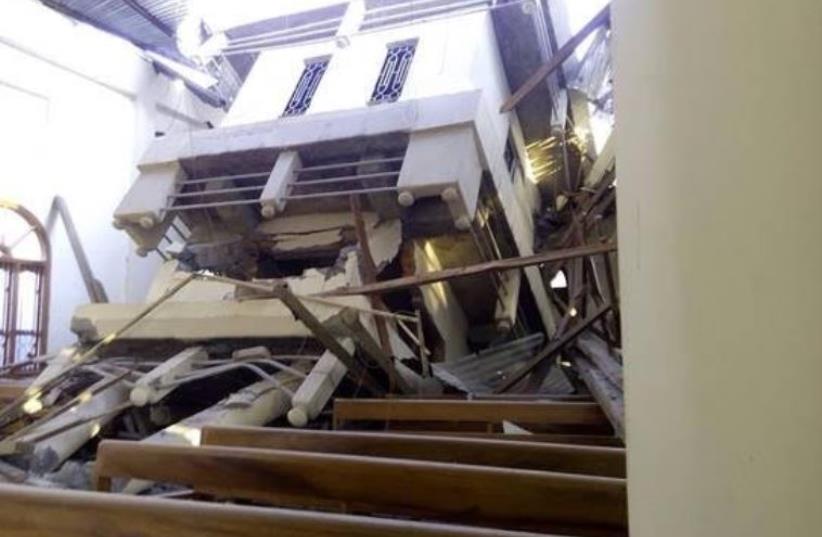 Damage to one of the synagogues in Manipur
(photo credit: Courtesy)
Advertisement
A powerful earthquake struck near the Bnei Menashe community in northeastern India early Monday.The quake killed at least nine people and injured more than 90, none of whom were from Bnei Menashe. The Bnei Menashe – descendants of the tribe of Manasseh, one of the Ten Lost Tribes – reported extensive damage to their community in the Indian state of Manipur.“The earthquake struck early in the morning and buildings shook violently,” said Tzvi Khaute, Shavei Israel’s emissary to Manipur and a member of the Bnei Menashe community. “Thank God no one among the Bnei Menashe was injured or killed.  There is, however, extensive damage from the quake.”The US Geological Survey said the earthquake registered a 6.7 magnitude.Shavei Israel has launched an emergency relief fund to assist members of the Bnei Menashe community affected by the natural disaster.“We are in touch with the leaders of the Bnei Menashe community throughout northeastern India. Miraculously no one in the community was harmed, but we are concerned by reports of damage to homes and property,” said Shavei Israel chairman and founder Michael Freund.In recent years, some 3,000 Bnei Menashe, whose ancestors were exiled from the Land of Israel more than 2,700 years ago by the Assyrian empire, have made aliya thanks to Shavei Israel. “There are still 7,000 Bnei Menashe living in India and 700 of them, many of whom were affected by the earthquake, are awaiting final permission to make aliya in 2016. I call on the Israeli government to bring them home to Zion as soon as possible.”After being exiled, the Bnei Menashe wandered through Central Asia and the Far East for centuries, before settling in what is now northeastern India, along the border with Burma and Bangladesh. Throughout their sojourn in exile, the Bnei Menashe continued to practice Judaism just as their ancestors did, including observing the Sabbath, keeping kosher, celebrating the festivals and following the laws of family purity. And they continued to nourish the dream of one day returning to the land of their ancestors, the Land of Israel.Today, there is a large community of Bnei Menashe members in the Kiryat Arba settlement, next to Hebron. sign up to our newsletter