On visit to London, prominent Israeli priest stands up for Israel's right to defends itself in the face of Palestinian terror attacks. 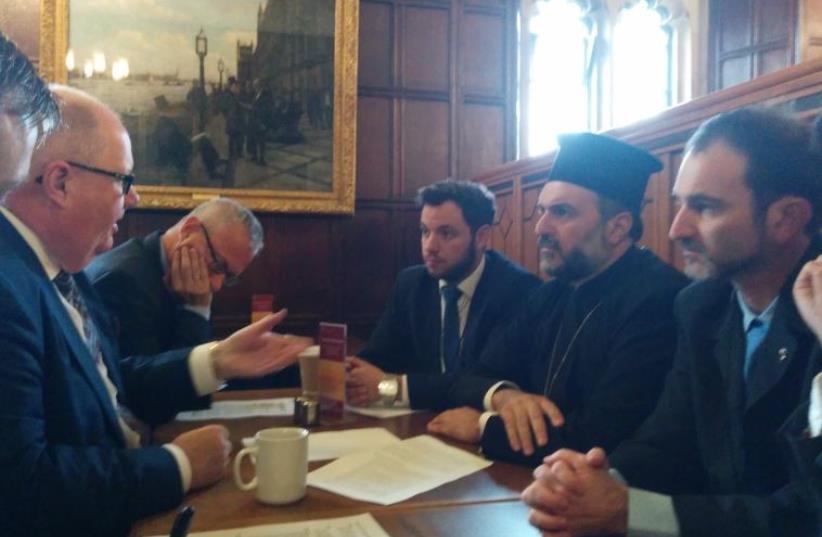 Father Gabriel Naddaf meets government officials in London
(photo credit: Courtesy)
Advertisement
Israeli Greek Orthodox Priest Father Gabriel Naddaf defended  Israel's right to defend itself while in London over the past week,  on a visit organized by the British Zionist Federation against the backdrop of the current security situation.During his six-day visit, the prominent priest attended a meeting at the British Foreign Office in London on Friday, which was led by the Deputy of the Human Rights Department and was attended by representatives of the Ministry of Foreign Affairs, the Ministry of Defense and other UK government agencies.Naddaf spoke about the persecution of Christians in the Middle East and in Gaza, comparing it to the freedom and security that Christians and other minorities enjoy as citizens in Israel."Every five minutes a Christian is killed in the Middle East because of his faith," he told the British officials. "Israel gives me equality, rights, and security- something I cannot get in many other countries of the Middle East." He also referred to the burning of Joseph's Tomb last week and of the St.Charbel Monastery in Bethlehem three weeks ago, accusing the PA of doing nothing to prevent such attacks, and further, trying to cover them up after the fact. "It is exactly this type of attitude by the leadership of the Palestinian Authority that encourages vandalism and terrorism against Christian sites because Palestinians extremists know that they will not be brought to justice or punished for their acts," Naddaf said at the time of the arson attack in Bethlehem.When questioned over Israel's response to the recent wave of terrorism, Father Naddaf asserted that the police has a responsibly to deal with these incidents with a firm hand in order to safeguard its citizens in the fight against terrorism and extremism.Naddaf asked that the British government consider halting the financial support they give to the Palestinian Authority until it denounces violence and terrorism. He also called for an end to the funding of certain human rights organizations which he claims, in reality, work against human rights, against democracy and against the integration of Christians and Muslims in Israeli society.Naddaf stressed that peace can only come if people: "stop following an extremist ideology that teaches hate and violence and if they allow peace to enter their hearts and learn to accept their fellow human beings, regardless of the ethnicity of religion, as equal and as deserving of peace."In addition to these meetings, Father Naddaf met with leaders of London's Jewish community, spoke at two synagogues and at a Zionist Federation event.
Sign up for our Christian World newsletter >>