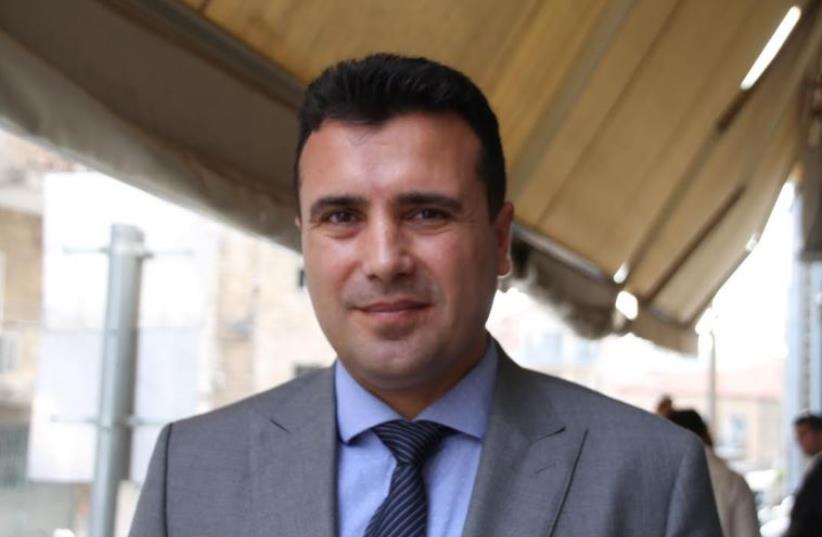 Macedonian Opposition leader Zoran Zaev braves the Jerusalem streets and stands outside Mahane Yehuda
(photo credit: "BRING BACK OUR BOYS" CAMPAIGN)
Advertisement
For a Christian politician from a landlocked country the size of Vermont, the biblical land of miracles offers a tantalizing hope that with Israeli aid, his Balkan state can ascend to importance on the world stage, much as the Jewish state has done.The wave of terrorism sweeping the country didn’t deter Macedonian opposition leader Zoran Zaev from visiting Israel for the first time this week, in advance of April’s elections in his country.On Monday, when Jerusalem’s typically bustling Mahaneh Yehuda market was relatively empty of shoppers, Zaev arrived for lunch, and even stood outside for a time to smoke a cigarette.“It is really a very great honor to start my visit in this holy city,” said Zaev, who had just visited President Reuven Rivlin, and who hoped to tour Jesus’s tomb in the Church of the Holy Sepulchre before leaving on Wednesday.He imagined, he said, that it was “not easy to be an Israeli citizen,” facing the possibly of terrorist attacks on a daily basis. In a city rocked by violence, he spoke animatedly on the topic of freedom, justice and peaceful regime change.In Macedonia, the 41-year old politician forced the upcoming election and created a large protest movement by revealing that the government had spied with wiretaps on some 20,000 of its citizens for more than four years.The current government, he said, controls the judiciary system and has a poor record on transparency, free speech and political freedom. “There are leaders of smaller opposition parties that are still in prison,” Zaev said.The success of their protests and the upcoming elections “send a message to the world that without violence, without victims, without bloodshed, it is possible to change the regime,” he said.“We are trying to bring back freedom and democracy for our country,” said Zaev.In addition to heading the opposition, he is the mayor of Strumica and the leading candidate to replace Prime Minister Nikola Gruevski. Should he win, he said, the first thing he would do is to open the state “in a very transparent way.”His next task is to stop the emigration of young Macedonians by improving economic opportunities. To achieve this goal, economic opportunities must be expanded through two steps, he said.The first is to join the European Union and NATO . The modern Republic of Macedonia, which was formerly part of Yugoslavia, became an independent state in 1991.Two years later it was accepted as a member of the United Nations, but it has yet to expand into the other two international organizations.The second step, Zaev said, is to “strengthen friendships with countries that are important to us, like Israel.”Israel and Macedonia already have strong ties. This year they are celebrating 20 years of diplomatic relations.Macedonia has a better record than many European countries at the UN, where it often abstains on important votes rather than joining the majority of countries who vote against Israel.Among the active cooperative ventures between the two countries is drip irrigation, which Macedonia uses in its food production. Israel also trains Macedonian helicopter pilots and helps with technological tools for border defense.Za’ed said that commercial ties can be even better, so his focus here is primarily on economics, and not geopolitics or terrorism. He wants to learn how to duplicate the Israeli miracle for his country of only two million people, whose population has been stagnant for more than a decade.“We are a small country, and Israel is a good friend of ours. We have a lot to discuss regarding improving future cooperation between our citizens,” Zaev said.Macedonia can benefit from Israeli technological knowhow in cyber-security, telecommunications, transportation, energy, agriculture and especially water management, he said.In general, Zaev said, Israel is good at getting the most out of its resources. His country has many resources, but has not managed them well. “We have a lot of water, but we do not know how to use it well.”Their desire to improve its capacity in all these sectors provides good investment opportunities for Israeli businessmen, Zaev said.Macedonia borders Kosovo, Serbia and Bulgaria, as well as two EU member states, Greece and Albania, so it is well located for trade. Once it becomes an EU member state, Israeli investors will also benefit from the expanded economic opportunities that his country would offer.The two societies are also linked because they are multi-ethic nations, he said.Jews have a long history with his country that dates back to the time of the Second Temple. Before World War II, in the area now under Macedonian rule, there were some 12,000 Jews, of whom 7,144 were killed in the Holocaust.Most of the survivors emigrated.At present there are only some 250 Jews in the country.Zaev spoke very highly of the Jews in his country, as a “distinguished society” and “good citizens.”Macedonia has a monument to the Holocaust in their capital city of Skopje.The fourth-largest Holocaust museum in the world, it is located right next to the Foreign Ministry. The museum’s presence in the capital is highly symbolic and sends a message “that this will not happen again anywhere in the world,” said Zaev.
sign up to our newsletter