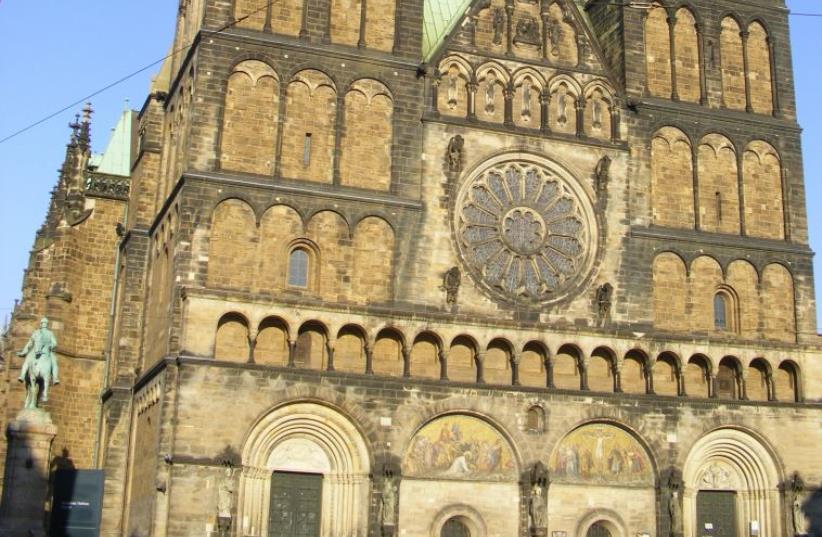 Towers of Bremen Cathedral
(photo credit: Wikimedia Commons)
Advertisement
NEW YORK – The city of Bremen’s Jewish community blasted the local Evangelical Church for its failure to fire a pastor who openly declares himself an anti-Semite and plays a key role in stoking hatred of the Jewish state.“How should we accept a representative for dialogue, who is also responsible for dialogue for the Evangelical Church in Bremen with religious communities in Bremen – and should act in a neutral way – when he openly presents himself as anti-Semitic?” local Jewish leaders wrote in a letter on Tuesday to Edda Bosse, the president of the Evangelical Church in the city.“We decisively reject working with Pastor [Volker] Keller and are surprised how he continues to influence one of your communities as a pastor,” wrote Jewish community leaders Elvira Noa, Renata Bas and Dr. Grigori Pantijelew, as well as the city’s Rabbi Netanel Teitelbaum.The Jewish leaders continued, “We are shocked and appalled over Keller not only minimizing anti-Semitism but especially that he misused his position and acted in a way unworthy of his office.”Keller serves on Bremen’s Council for Integration and plays a role in the absorption of migrants from Muslim-majority countries.The Jewish leaders wrote that Keller “works with haters of Israel whose criticism of Israel is clearly anti-Semitic.” Keller co-founded the NGO Nord-Bremer Citizens against War, whose members demonstrate in front of stores in Bremen calling for Germans to not buy products from Israel. According to critics, Keller is part of a large anti-Israel network in Bremen that seeks to demonize and delegitimize the Jewish state. The Bremen Social Democratic Mayor Carsten Sieling and the church have been swamped with criticism from Jewish human rights groups and from journalists who write about contemporary anti-Semitism. In a separate letter to Sieling, the Berlin office of the American Jewish Committee wrote, “In addition to his activity as a pastor in the city council for integration, Mr. Keller is active in the BDS movement, which calls for a total cultural, economic, academic boycott of the State of Israel.”In an email sent to The Jerusalem Post, Keller praised an allegedly anti-Semitic lecture in his church community building held by a hardcore BDS advocate and wrote: “Yesterday evening the anti-Semite Arn Strohmeyer delivered a lecture to me... Best wishes to Israel, Yours truly, Volker Keller, anti-Semite.”The crisis engulfing the Bremen Evangelical Church over Keller’s self-proclaimed anti-Semitism has been met with silence from the national Evangelical Church in Germany (EKD) leadership. Emails to Dr. Heinrich Bedford-Strohm, the head of the EKD, were not answered. Carsten Splitt, a spokesman for Bedford-Strohm, told the Post on Friday that “the responsibility in this matter lies, on account of our federal structure, with the Bremen Evangelical Church... The EKD and the Bremen Evangelical Church are in complete agreement in the clear rejection of every form of anti-Semitism.”When asked about the Bremen Jewish community’s letter rejecting Keller, as well as the AJC complaint, Renke Brahms, the executive cleric of the Bremen Evangelical Church, declined to answer. Brahms told the Post last month that Keller’s email was meant to be sarcastic.Critics say there is a big anti-Semitism problem in Bremen, including municipality-subsidized anti-Semitic lectures and weekly calls to boycott Israel in the heart of the city that are met largely with indifference by politicians and non-Jewish civil society organizations.The municipality provides significant funding for the Bürgerhauses Weserterrassen cultural center where, according to the Bremen Jewish community, anti-Semitic lectures are held. Activists frequently march through stores to identity Israel merchandise for opprobrium. During the IDF’s Operation Protective Edge against Hamas in the Gaza Strip in 2014, more than 400 anti-Israel activists marched in Bremen. According to a Bremen domestic intelligence report, local anti-Israel activists traveled to Berlin to participate in the annual al-Quds protest calling for the destruction of the Jewish state.André Städler, a spokesman for Sieling, wrote the Post by email on Friday, “Bremen, over the decades, has been a stronghold of the fight against anti-Semitism, racism and contempt for humanity.”He added, “In Bremen we don’t tolerate anti-Semitism. We know that there is anti-Semitism. But anti-Semitism in Bremen does not get public platforms.” When asked whether Keller should be sacked, Städler declined to comment.The spokesman said that Bremen has as “an initiative to combat growing anti-Semitism by young Muslims... and there are places, including city hall, that clearly criticize anti-Semitism and also condemn BDS.”Writing on the website of the American magazine Tablet, Liel Leibovitz, authored an article about Keller titled, “A German pastor wants to make anti-Semitism great again.”Leibovitz wrote, “When a German pastor declared himself last week to be a proud anti-Semite, he might’ve given us our first glimpse at the brave new turn of Jew-hatred, an era far more candid and [palpable] than any most of us have experienced in our lifetimes.”sign up to our newsletter