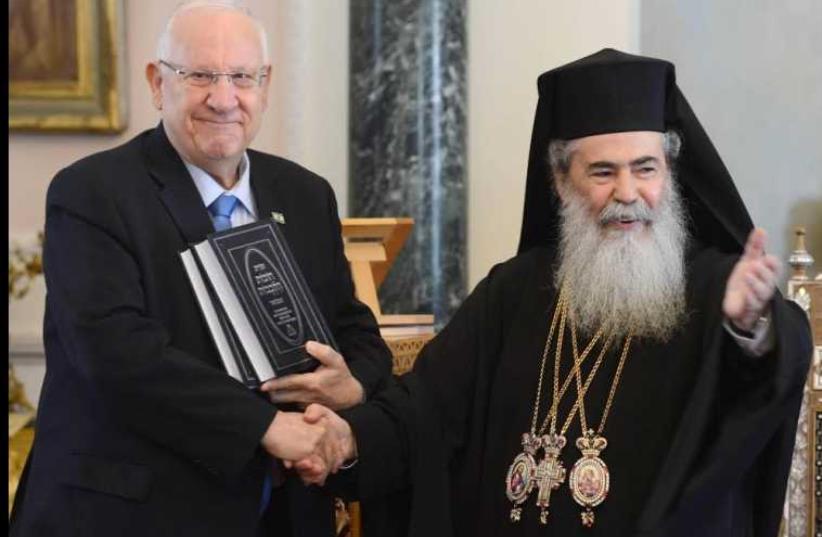 PRESIDENT REUVEN RIVLIN meets with senior Greek Orthodox cleric Theophilos III in Jerusalem
(photo credit: Mark Neiman/GPO)
Advertisement
While President Reuven Rivlin has been the subject of controversy and criticism in both the traditional and social media for exceeding what many believe should be a strictly ceremonial role, he came in for high praise on Monday from Greek Orthodox Patriarch Theophilos III.Speaking at the traditional New Year reception the president hosts for religious and lay leaders of the various Christian denominations, Theophilos lauded Rivlin saying: “You have often said that you are the president for all the peoples who call Israel their home, and that the whole human family are children of one God. You have defended the rights of minorities in this country, and you have condemned the use of violence from whatever side it comes, especially in the current situation.“We who represent the Christian communities of the Holy Land join you in these affirmations and condemnations. We understand the integrity of this region to lie in a healthy diversity of ethnic and religious traditions in which there is true coexistence and mutual respect and security for all. And we reject all forms of violence and terrorism no matter what the circumstances. It is absolutely unacceptable to use religion in this way.”Earlier in the morning, Rivlin had referred to the 50th anniversary year of Nostra Aetate, which had spoken out against anti-Semitism and had paved the way for dialogue between Catholic and Jewish communities.In this context, he had spoken of his meeting at the Vatican with Pope Francis who had told him that a true Christian cannot be anti-Semitic.Addressing the audience in front of him, Rivlin presented the mirror image of that statement by declaring: “A faithful Jew cannot be anti-Christian or anti-Muslim.”The declaration elicited a spontaneous round of applause.Rivlin stated that he was proud Israel protects freedom of worship and expression for everyone of every faith, adding, “It is not enough for us to only be a safe home for Christians. We want the community to prosper and play a part in Israeli society.”Here Rivlin returned to his much exploited mantra of bridge-building and dialogue.“Jerusalem is the center of the world,” he said. “Billions of people look to this city in hope and prayer. We all have a duty at the beginning of the New Year and every day to stand together and show the world the conflict in this region is not a war about religion, it is a war about hate. We must work to build bridges between our communities in the Holy Land and around the world. We must build dialogue, and show that people with different beliefs can live side by side and even together in schools, universities, in the workplace, in parliament – and even on the soccer field.”Rivlin emphasized that this has been his mission as president. Theophilos responded by saying the mission of the Christian communities has been the safeguarding and serving the spiritual richness and beauty of Jerusalem, “which is the embodiment of sacred history shared by Jews, Christians and Muslims alike. Jerusalem is a home of worship and our mission throughout the ages has been to ensure this special and unique character by upholding the provisions of the status quo, which remains the key to harmony and peace, and also respecting the legitimate privileges and rights that history has accorded to us.”The event, which was scheduled to begin at 11 a.m., started 15 minutes behind time due to a malfunction in security equipment, which resulted in one of the city’s longest ecumenical lines as archbishops, bishops, priests, nuns, lay people, some officials and Jewish, Christian and Muslim media personnel waited for more than half an hour in the winter sun for the equipment to be repaired so they could pass through.The text in the official invitation to the event stated that it would be held with the participation of Silvan Shalom, interior minister and deputy prime minister. In the interim, Shalom, with allegations of sexual misconduct hanging over his head, resigned from the government and the Knesset, and thus did not attend.
sign up to our newsletter