Hijabs, kippot and Santa hats: The Haifa Festival of Festivals

"Historically Christians, Jews and Muslims live together here and respect each other. This only happens in Haifa,” Haifa resident Roni Suid says.

By ARIEL COHEN
DECEMBER 16, 2014 12:24
A young boy enjoys the Festival of Festivals parade in Haifa
(photo credit: ARIEL COHEN)
Advertisement
A vendor in a Santa costume roasts chestnuts, standing next to a hijab-clad woman, making pita bread. Nearby, the smell of Hanukkah doughnuts fills the air.No, the Festival of Festivals not your ordinary holiday celebration in Israel, but then again Haifa is not your ordinary town. This first festival occurred eight years ago when Christmas, Hanukkah and Ramadan all occurred on the same day. Although the dates of the holidays change every year, the December festival remains. The yearly festival boasts activities such as arts fairs, parades and performances every weekend throughout the month of December. Haifa's Christian population is the second largest in Israel, with 14,400 Christian residents, who make up 14 percent of the town’s population. Four percent of the population is Muslim and the remaining 82% is Jewish. Haifa residents are proud of the fact that all three faiths are able to co-exist in their diverse city, and of this unique event in which they come together to share in celebration of their distinct winter holiday traditions. Gabriel Ashkar stands outside the music shop he works in wearing a full Santa Claus costume which he borrowed specially for the occasion. Although he is originally from Nazareth, he says that “there is a peace in Haifa like nowhere else, among all the people-- Christians, Jews they all come together here.”The neighborhood in which the festival is held, Wadi Nisnas, is primarily Arab Christian, and the event provides a unique platform for the locals to come together. “Most of the people in Wadi Nisnas are Christian. They know each other, they go to church together, they marry each other,” Haifa resident Milad Shamsha says. ”Most families have been here since before Israel became a state.”Despite the fact that a neighborhood such as Wadi Nisnas may be predominantly made up of residents of one faith, they live harmoniously with members of other faiths. Shamsha believes that Haifa’s coexistence stems from this integration of different religious groups within its neighborhoods. “It works because we are all mixed here," Shamsha says. "My neighbors are Jewish, and one Muslim. We are all friends in Haifa, unlike other places. In Jerusalem you speak Arabic and you cannot walk in a Jewish community and it's the same the other way around. Here everyone walks together.” 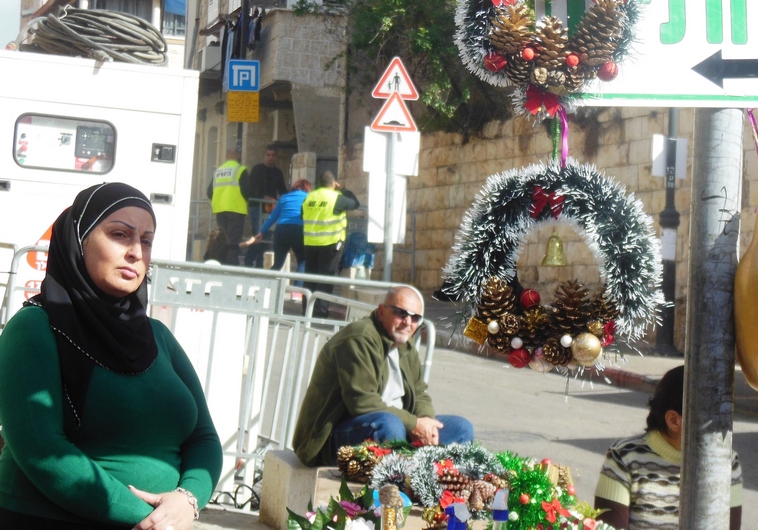 Haifa's  unique sense of unity is also transmitted by the landmark golden Baha’i Temple, which looms over the entire city. The Baha’i faith emphasizes the oneness of spiritual unity and equality of all humanity, a lesson Haifa residents all seem to have taken to heart. Roni Suid, an Arab-Christian vendor who sells beans and spinach pastries with his children at the festival every year, applauds the event’s ability to bring the community together. “People here are living together,” Suid says. “Historically Christians, Jews and Muslims live together here and respect each other. This only happens in Haifa.” sign up to our newsletter