Father Naddaf of Nazareth gathers with soldiers to celebrate ahead of the holiday. 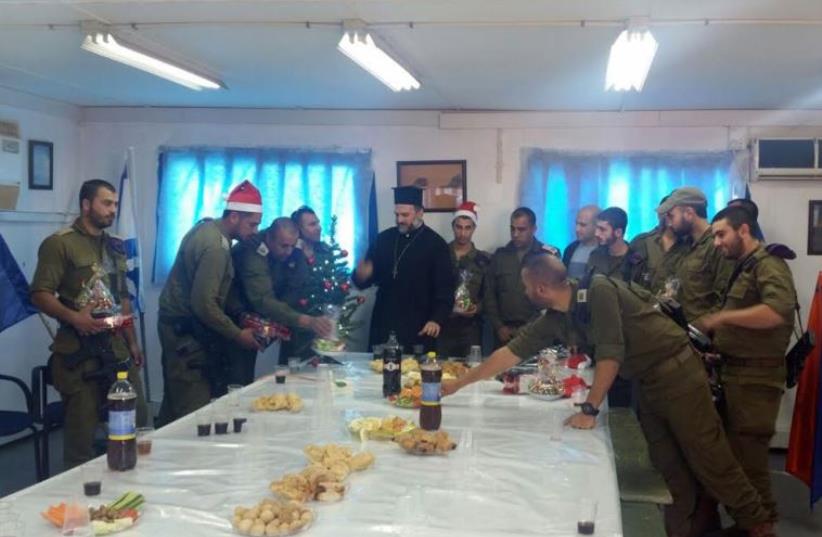 Father Naddaf of Nazareth with Christian Israeli IDF soldiers at a Christmas party on December 21, 2015
(photo credit: ISRAELI CHRISTIAN RECRUITMENT FORUM)
Advertisement
Father Gabriel Naddaf of Nazareth recently gathered some of these Israeli Christian soldiers for a Christmas party at an IDF base in northern Israel, delivering treats and thanking them for their service to Israel.  Naddaf's Israeli Christians Recruitment Forum, with support from the International Fellowship of Christians and Jews, seeks to increase the number of Christian Arabs enlisting in the IDF.
Ministers and MKs wish Israeli Christians a Merry Christmas‏
According to figures provided by the IFCJ, the number of Christians drafted into the IDF has steadily increased from just 40 in 2012 to more than 100 in 2014 and in March of 2015 alone, 102 Christian Arabs were inducted into the army, through the Israeli Christians Recruitment Forum.  “I believe Israel's Christian community should integrate more into mainstream Israeli society,” Naddaf recently said. “Why do the Druse serve? Why do the Beduin serve? But not the Christians? It's because they're scared. This has to change. It's time to say in a loud and clear voice: Enough," he added.  At a recent Jerusalem ceremony, Naddaf, who prefers to call Arab Christians Israeli Christians, thanked “Christian donors around the world” for supporting him through IFCJ.  IFCJ's founder and president, Rabbi Yechiel Eckstein, told Naddaf at the ceremony: “You're at the forefront of a just cause. Trust, equality and mutual assistance between citizens is crucial for the continued existence of a just and strong Israeli society.”IFCJ estimates that there are an estimated 165,000 Arab Christians in Israel. sign up to our newsletter