The incident comes just days before the militant group is scheduled to hold an event forcing non-believers to convert. 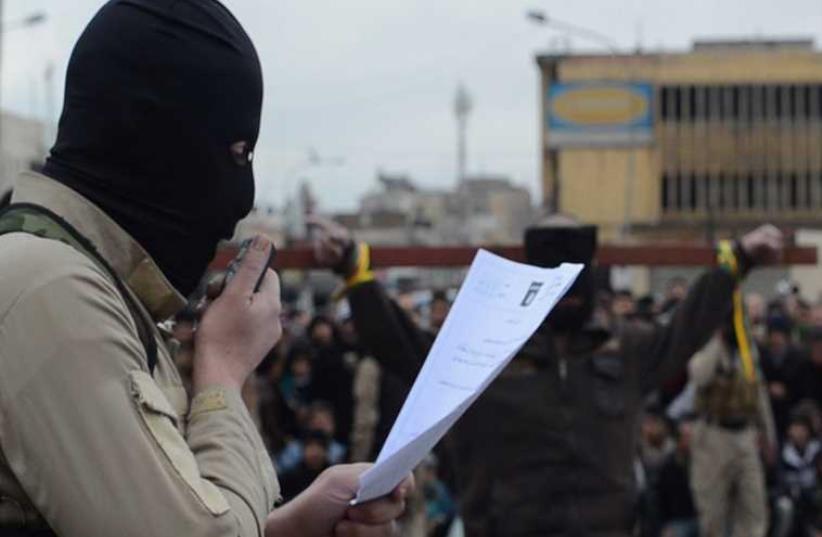 A masked Islamic State militant reads the charges of two men tied to a cross
(photo credit: SCREENGRAB/JUSTPASTE.IT)
Advertisement
Islamic State militants in Libya crucified three brothers of a local family after suspicions arose that they were supporting the local Libyan government, which under ISIS law is equivalent to apostasy.The militants hung the three brothers on crosses and were left out for public viewing for about five hours. A photo circulated last week showing the brothers being crucified in the coastal town of Derna, Libya, after they refused to turn over their brother who was accused of supporting the Libyan Army. The Islamic State has been attempting to coerce the town’s residents into joining their military ranks as part of their efforts to overtake the Libyan National Army. ISIS has advertised an upcoming lecture entitled “The Start of the End” in town, in order to convince non-believers to submit to their cause and join their ranks. Those who do not pledge allegiance to the group will face death. "The situation is really, really bad nowadays, They are going to ask all people to declare their allegiance to the caliphate and if they don't do it, they will punish them," an anti-ISIS activist told Newsweek .  "A friend of mine who is working with ISIS said that they will force people to go to ISIS and declare because they want help in the war."ISIS has long used crucifixion as means of embarrassing those they kill, as, in their eyes,comparing the dead to Jesus Christ is a great insult. It is the stated goal of the terrorist organization to eradicate Christianity from all their territories. In April, ISIS released a video showing about 15 Christian men being beheaded on a beach, and another group of the same size, in an area of shrub land, being shot in the head. Prior to that, 28 Coptic Christians were beheaded on the shores of Libya in February.sign up to our newsletter