"ISIS soldiers will work to kill these people so this country is clean of them," leaflets state. 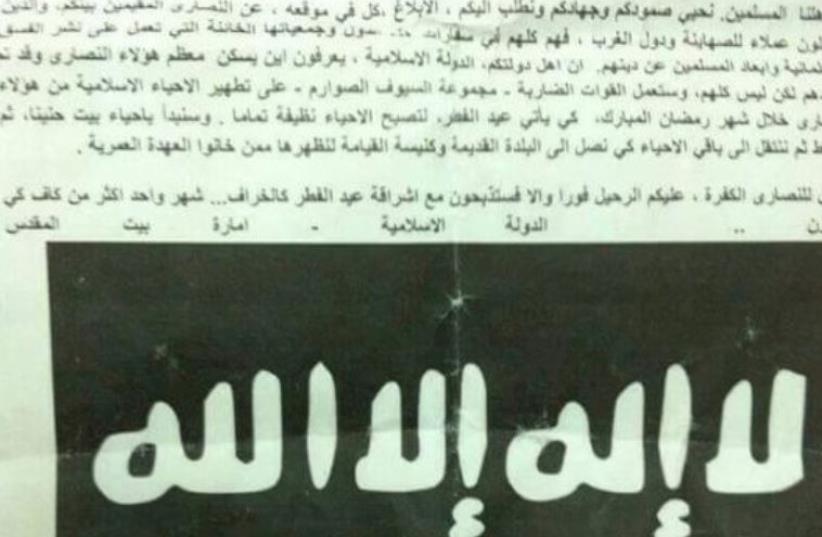 Flyer purportedly issued by an ISIS branch in Jerusalem that threaten Christian Arabs
(photo credit: Courtesy)
Advertisement
Menacing Arabic flyers, purportedly issued by an Islamic State branch in Jerusalem, threatened Christian Arabs over the weekend with slaughter unless they flee the capital by the end of Ramadan.While the authenticity of the leaflets, which bear the Islamic State insignia, cannot be verified, they called upon like-minded zealots to identify “those who collaborate with the Zionists” and provide their addresses.“Those who work with the Zionists also encourage Muslims to leave their religion and become more secular and open, and they spread evil,” the leaflet stated. “They take these Muslims away from us…. We know where they are, but we need help to find them all – all those Christian collaborators.”A police spokesman on Monday said that he was unaware of the leaflets, which were clandestinely distributed roughly one week after a church by Lake Kinneret was set alight in an apparent hate crime.The note goes on to state that “ISIS soldiers will work to kill these people so this country is clean of them and... will clean this country and the Muslim Quarter from these Christians during this holy Ramadan.”It added that the group’s operatives will begin their search in the Jerusalem neighborhoods of Beit Hanina, Shuafat, the Muslim Quarter of the Old City, and the Church of the Holy Sepulchre.“Because the Christians violated the Pact of Omar [made when Muslims conquered Jerusalem], we will do this,” the note concluded. “So we tell our Christians and the nonbelievers: Go away now or you will be killed when the Id [al Fitr festival ending Ramadan] is near.And you will be slaughtered like the sheep. One month is enough for them to go away.”The leaflets were signed “The Islamic State – Emirate of Bayt al-Maqdis [the Holy City, i.e., Jerusalem].”While no Christian Arabs who received the note agreed to be interviewed, one Israeli man with numerous Arab friends said the vitriol has rattled some within the community.“They’re fearful for their lives and don’t want to go to the police because they feel that the police won’t be responsive,” the man said, requesting anonymity.“What’s most problematic is that in this case individuals aren’t being targeted but an entire group, which is pretty darn serious,” he continued.“If leaflets with swastikas and similar threats were sent to Jewish neighborhoods, people would be outraged. I hope and pray it amounts to nothing at all.”Noam Ivri and Seth Frantzman contributed to the translation of this document.
Sign up for our Christian World newsletter >>