Israel does not formally recognize the genocide diplomatically, nor is the historical event taught in Israeli schools. 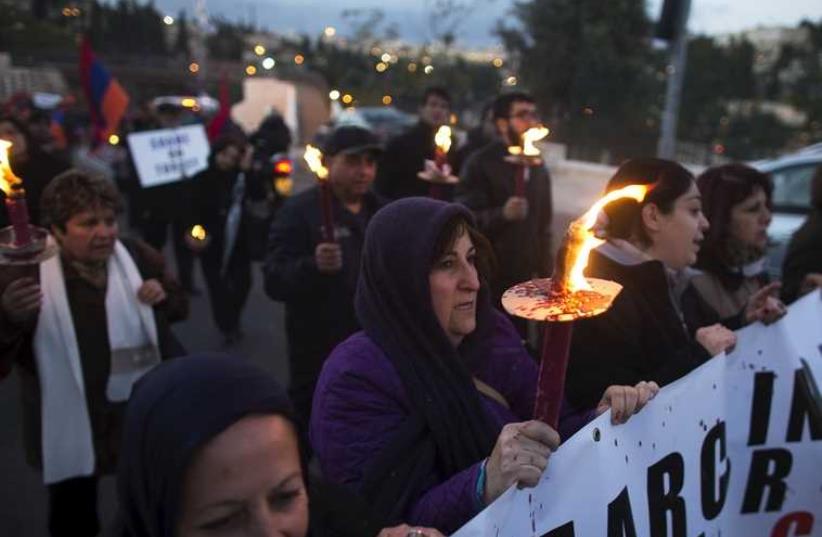 Members of the Armenian community attend a memorial march marking the 100th anniversary of the mass killings of 1.5 million Armenians by Ottoman Turkish forces in Jerusalem's Old City
(photo credit: REUTERS)
Advertisement
Hundreds of Armenians and Israelis alike took part in events to commemorate the 100th anniversary of the Armenian genocide in Israel Friday, despite Israel's failure to recognize the mass killings as genocide.Armenian Jerusalemites gathered in their quarter of the old city on April 24th for a commemorative ceremony during which the head of the Armenian church of Jerusalem rang the bells at the Church of St. James 100 times, symbolic of the centenary of the massacre.Israel does not formally recognize the genocide diplomatically, nor is the historical event taught in Israeli schools. Turkey, one of Israel's few peaceful friends in the region, vehemently denies that the deaths were part of a “genocide.” Although it does acknowledge that many Christians were killed by Turkish Ottomans during World War I, it insists that the deaths were part of warfare, and not systematic in nature.Armenians are one of the oldest ethnic communities in Israel, their vast majority Armenian Orthodox Christians. In 1915, nearly 1.5 million Armenians residing in the area of present day Turkey were systematically slaughtered by the Ottomans. Those who escaped fled to the surrounding regions, many traveling to what was then Palestine.They knew that Palestine was already a hospitable place for Armenians, as many already lived there, arriving in Jerusalem pre-genocide, hundreds of years ago with the Crusaders, as far back as the first century.While centennial anniversary massacres were not marked officially in Israel, various ceremonies and protests were held in both Jerusalem and  Tel Aviv, commemorating and  calling for international recognition of the genocide.“As Jewish people, who went through the Holocaust and know what Holocaust denial means and fight it to this day, we have the moral imperative to show sensitivity to the tragedies of other nations and not deny that genocide took place in the past and continues to happen today.” Meretz Chairwoman Zehava Gal-On said while speaking at the commemoration ceremony in the Armenian quarter. "We must understand the implications of ignoring [other genocides] and recognize the suffering... just as the pope and European Parliament did by recognizing the Armenian Genocide.”Israeli Armenians also staged protests in front of the Turkish embassy  in Jerusalem on Friday, demanding that Ankara recognize the 1915 mass killings as genocide. Similar protests occurred in front of the Turkish embassy in Tel Aviv that same day. The European Parliament, France, Germany, and most notably, the Vatican, have all recognized the events as a genocide. Many other countries, including the United States and Israel, have refrained from doing so, largely in part to the country's diplomatic ties with Turkey. Armenia and Turkey signed accords in 2009 in order to create diplomatic relations between the two countries, open up the land border, and hopefully bridge hostilities remaining from WWI. But, due to deadlock and accusation of unfair play, Armenian President Serz Sarkyan withdrew the peace accords in February.A large commemorative vigil was also held in Yerevan, Armenia, which hosted representatives from more than 60 countries.Two Israeli MKs, Anat Berko (Likud) and Nachman Shai (Zionist Union) both attended the  event in Yerevan to show Israeli solidarity with the Armenian people. During the ceremony, footage of both the Armenian genocide and the Holocuast was shown, likely as a means of comparison. “The time has come to recognize the Armenian Genocide. That is our basic obligation,” Shai said following the event.sign up to our newsletter