Religious life in Russia is dominated by the Orthodox Church, which exerts considerable political influence and enjoys the support of President Vladimir Putin. 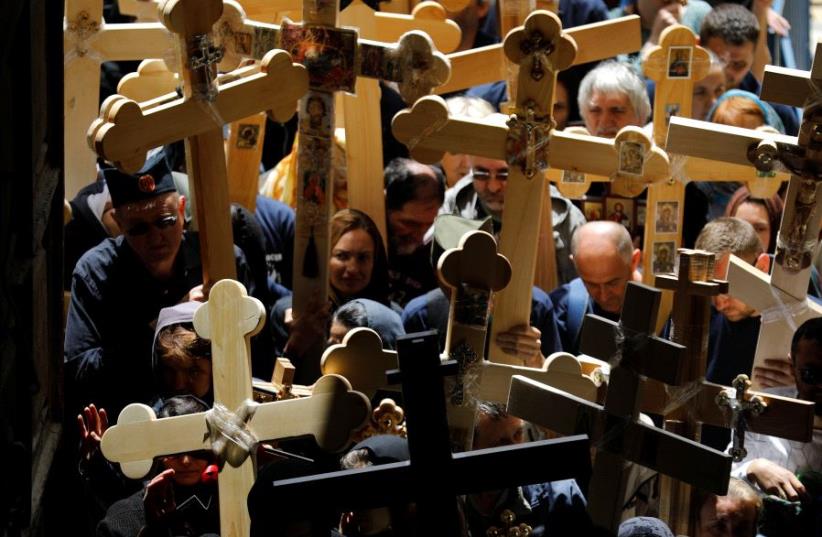 Worshippers carry crosses during a Good Friday procession as they enter the Church of Holy Sepulchre in Jerusalem's Old City April 14, 2017
(photo credit: REUTERS)
Advertisement
The Jehovah's Witnesses said on Tuesday it would appeal a ban on its activities in Russia at the European Court of Human Rights in Strasbourg, saying it had exhausted all other legal channels.He was speaking a day after Russia's Supreme Court rejected the religious group's appeal and upheld an April ruling which declared the organization "extremist" and ordered it to disband in Russia."We plan to appeal this at the European Court of Human Rights as soon as we can," Yaroslav Sivulskiy, a member of the European Association of Jehovah's Christian Witnesses, said by phone."All legal avenues inside Russia have been exhausted."Sivulskiy said the Jehovah's Witnesses strongly disagreed with the court's ruling against it, but had no option but to comply.Religious life in Russia is dominated by the Orthodox Church, which exerts considerable political influence and enjoys the support of President Vladimir Putin. Some Orthodox scholars view Jehovah's Witnesses as a 'totalitarian sect'.Prior to the ban, Russian authorities put several of the group's publications on a list of banned extremist literature and prosecutors have long cast it as an organization that destroys families, fosters hatred and threatens lives.The group, a United States-based Christian denomination known for its door-to-door preaching and rejection of military service and blood transfusions, says this description is false.It says it has 175,000 followers in Russia.sign up to our newsletter