As many as 1,000 Christians are feared dead after the devastating earthquake, according to Reuben Rai, director of Churches Network Nepal. 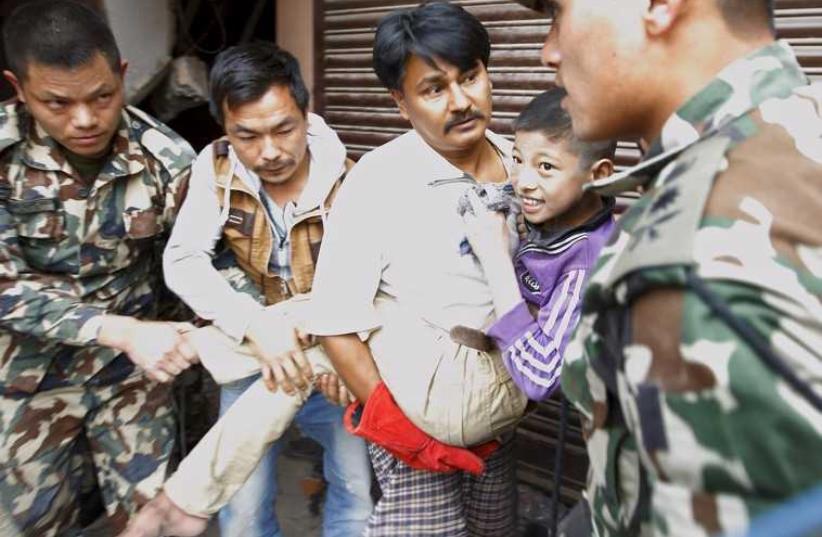 Boy rescued from collapsed house after Nepal earthquake
(photo credit: REUTERS)
Advertisement
Evangelical aid organizations are pitching in to help the Christians of Nepal in the wake of the tremendous earthquake that destroyed the capital city of Kathmandu and claimed thousands of lives.According to Reuben Rai, director of Churches Network Nepal, as many as 1,000 Christians are feared dead with 200 alone in Dhading near the quake's epicenter, 100 in Kathmandu, and 200 in rural areas. In total, 7,000 Nepalese are confirmed dead, but numbers are expected to rise.When the Earthquake struck on Saturday at 12 p.m., many Christians were sitting in crowded pews, as 11a.m.-1p.m. is prime time for church services. About twenty people died while praying  in the Kanaan church in Kapan, a church on the top floor of  a high-rise building.Churches Network Nepal is currently working to collect data on what has been damaged and how many people have died, focusing primarily on the Nepalese Christian community and the areas they live in.“People are still trapped in the buildings and rescue teams are  working to get bodies out of the buildings,” Reuben said. “We have made a team to go to four different districts to take a report. It may take a couple days to understand the damage of the homes, building and people.”Reuben said they are collecting data so the organization can then figure how to best provide support. In the future they hope to address the basic needs of the Nepalese Christian community by supplying  blankets, food and medicine.Churches Network Nepal is the Nepalese branch of a larger network of non-denominational, non-profit Christian organizations worldwide. They work to create links between the various churches of Nepal, with over 40 Church leaders in the country working to improve the Christian minority community.The Christian organization said that they are the only Nepalese Christian team on the ground right now. While other Christian organizations are currently in Nepal, many of them coming from the United States, they have not coordinated their efforts yet. Despite the lack of outside help, they continue to press on.“We are helping Christians because we are Christians.” Reuben said. “It is very important.”
Sign up for our Christian World newsletter >>