The Roman police created the image with technology most used to catch criminals. 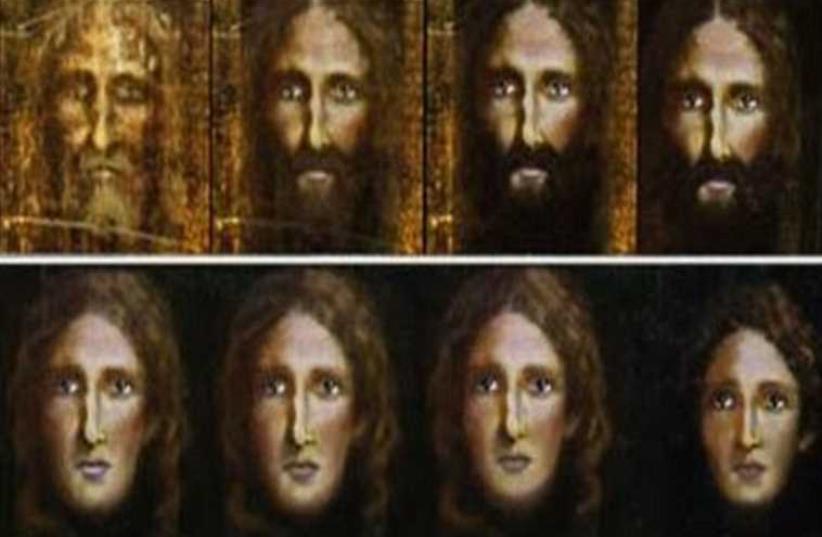 Detectives used a computer program to reverse the ageing process on an image from the Turin Shroud
(photo credit: ROME POLICE)
Advertisement
Police detectives in Italy claim that they have revealed how Jesus looked as a child based on forensics from his supposed burial cloth. The Turin Shroud, one of the most famous Christian relics to date, provided the scientists with an approximate image of Jesus’ face on the material. From there, scientists created an image, and reversed the aging process using cutting edge technology to reveal what Christ may have looked like as a young boy.The scientists used the same technique often employed to capture Italian mafioso who have been on the run for decades. By reducing the size of the jaw, raising the chin and straightening the nose, the replica of Jesus as a boy became clear.The 14-foot-long Turin Shroud that supposedly covered Jesus’ body at his death bears the impression of a bearded man with long hair, with numerous injuries that are consistent with a crucifixion. The cloth also shows a side wound, just like the lance-wound Jesus is said to have suffered. Despite these signs, many scientists have disputed the validity of the Turin Shroud. Carbon dating tests from 1998 concluded that the image on the shroud was made up to 1900 years after Jesus’ death. Believers counter claims by stating the researchers tested more modern elements of the Shroud and that other tests show the linen cloth conclusively derives from the Holy Land.The digital image was created to go along with the displaying of the Turin Shroud’s two month public display which began this week at the Cathedral of St. John the Baptist in Turin. Pope Francis is even expected to stop and pray before the cloth on June 21st. sign up to our newsletter