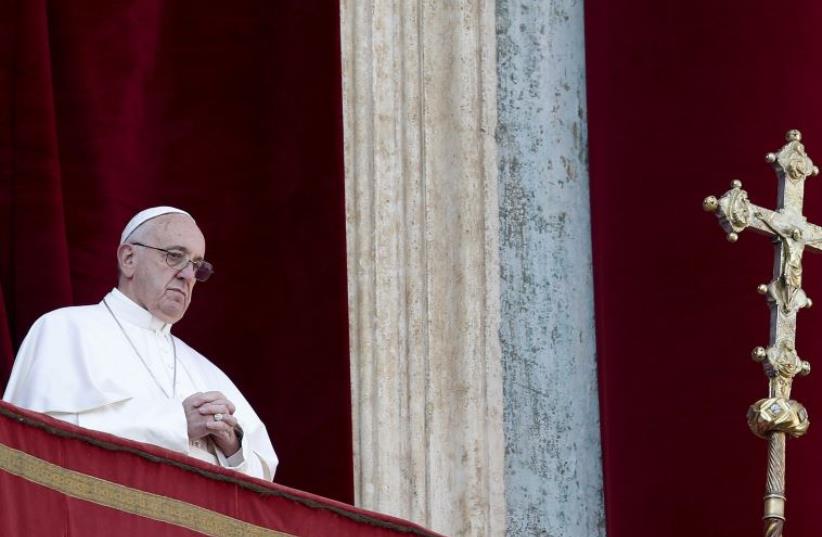 Pope Francis delivers a "Urbi et Orbi" message from the balcony overlooking St. Peter's Square at the Vatican December 25, 2015
(photo credit: REUTERS)
Advertisement
VATICAN CITY - Pope Francis urged the world in his Christmas message on Friday to unite to end atrocities by Islamist militants that he said were causing immense suffering in many countries.Security was tight at the Vatican as Francis, marking the third Christmas since his election in 2013, read his traditional Christmas Day "Urbi et Orbi" (to the city and the world) address from the central balcony of St. Peter's Basilica.Tens of thousands of people had to have their bags checked as they entered the Vatican area and then go through airport-style screening if they wanted to enter St. Peter's Square.Counter-terrorist police with machine guns discreetly patrolled the area in unmarked vans with dark windows.After calling for an end to the civil wars in Syria and Libya, the pope said:"May the attention of the international community be unanimously directed to ending the atrocities which in those countries, as well as in Iraq, Libya, Yemen and sub-Saharan Africa, even now reap numerous victims, cause immense suffering and do not even spare the historical and cultural patrimony of entire peoples."He was clearly referring to Islamic State militants who have carried out numerous attacks in those countries and destroyed many cultural heritage sites. In October, Islamic State militants blew up the Arch of Triumph, a jewel in the exquisite collection of ruins in the Syrian oasis city of Palmyra.BRUTAL TERRORISMThe pontiff condemned recent "brutal acts of terrorism," including the Nov. 13 attacks by Islamist militants that killed 130 people in Paris, and the downing of a Russian plane over Egypt's Sinai peninsula that killed 224 people on Oct. 31. Both were claimed by Islamic State."Only God's mercy can free humanity from the many forms of evil, at times monstrous evil, which selfishness spawns in our midst," he said. "The grace of God can convert hearts and offer mankind a way out of humanly insoluble situations.".He called for peace between Israelis and Palestinians in the area where Jesus was born."Where peace is born, there is no longer room for hatred and for war. Yet precisely where the incarnate Son of God came into the world, tensions and violence persist, and peace remains a gift to be implored and built," he said.He asked God to bring consolation and strength to Christians who are being persecuted around the world and called for peace in the Democratic Republic of Congo, Burundi, South Sudan and Ukraine.Francis said the human dignity of far too many people around the world was trampled on, including that of refugees and migrants."Even today great numbers of men and women are deprived of their human dignity and, like the child Jesus, suffer cold, poverty, and rejection," he said."May our closeness today be felt by those who are most vulnerable, especially child soldiers, women who suffer violence, and the victims of human trafficking and the drug trade."
Sign up for our Christian World newsletter >>