Pope Francis became the honorary member of the team on Wednesday.

By ARIEL COHEN
MAY 7, 2015 13:56
Pope Francis joins the Harlem Globetrotters!
Advertisement
Introducing number 90 ... Pope Francis!No, the Pope didn’t run to the court, but he did receive his own honorary jersey when the Harlem Globetrotters named Francis the ninth ever honorary member of the team on Wednesday. Four members of the eight-person squad bestowed the honor upon Francis during a general audience in Saint Peter’s Square at the Vatican. The title of an Honorary Globe Trotter recognizes those who exemplify “extraordinary character and achievement” and “who have made an everlasting mark on the world.”“We are very humbled by the opportunity to bestow this honor upon Pope Francis,” Harlem Globetrotters CEO Kurt Schneider said in a statement. “His tireless work for the well-being of the poor and elderly, his humanitarian efforts and his commitment to bridge gaps between people of various cultures are ways the Harlem Globetrotters also aspire to touch lives around the world.  He embodies the Globetrotters’ efforts to provide service, smiles and sportsmanship globally.” 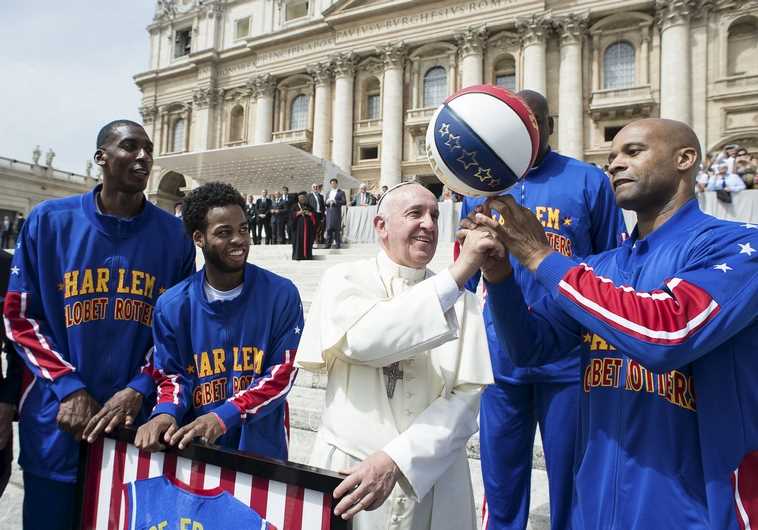 Globetrotters stars Hi-Lite Bruton, Ant Atkinson, Big Easy Lofton and Flight Time Lang met with the Pope and even taught him their signature spin move. Although Francis was only able to keep the basketball a float for few seconds, he still got some major credit for trying.sign up to our newsletter