Pope Francis has repeatedly called for peace in the Middle East throughout his papacy. 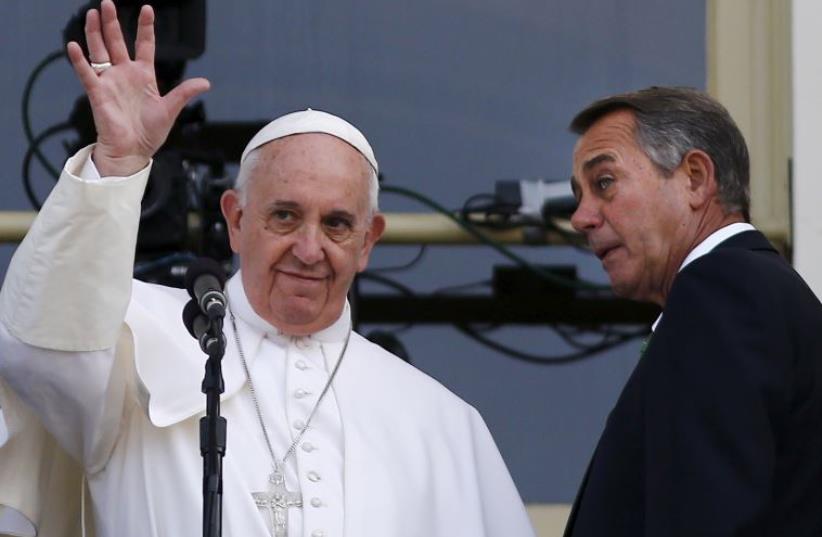 Pope Francis waves from the Speaker's Balcony after concluding his addresses, before a joint meeting with the US Congress, as Speaker of the House John Boehner (R) looks at him on Capitol Hill in Washington
(photo credit: REUTERS)
Advertisement
Pope Francis is one of the contenders for the 2015 Nobel Peace Prize.The name of Argentine Cardinal Jorge Bergoglio was little known outside of his homeland in the days following the resignation of Pope Benedict. As cardinals gathered to vote for his successor in the Sistine Chapel many names were being bandied about but few expected the next pope to be the humble Jesuit.The surprise choice was named at the Vatican on March 13, 2013, the new pope taking the name Francis I, becoming the first non-European pontiff in nearly 1,300 years."Brothers and sisters, good evening," the new leader of the troubled Catholic Church said as he walked onto the balcony in St. Peter's square.From the beginning of his papacy Francis has sought to make the Church more humble and available to all walks of society. At his inaugural mass he called for the Church to defend the weak and protect the environment.Addressing up to 200,000 people including many foreign leaders gathered under bright sunshine in St. Peter's Square, the Argentine pope underlined his central message - that the Church's mission was to defend the poor and disadvantaged.The mass, formally installing Francis as head of the world's 1.2 billion Roman Catholics, was much simpler and an hour shorter than the baroque splendor of his predecessor Benedict's inauguration in 2005.In keeping with his more down to earth style, Pope Francis broke with tradition during his first Holy Week, conducting the Holy Thursday afternoon service at the Casal del Marmo jail for minors on Rome's outskirts. During the service, the pope washed and kissed the feet of 12 inmates to commemorate Jesus's gesture of humility towards his apostles on the night before he died.Pope Francis has repeatedly called for peace in the Middle East throughout his papacy.In May 2014, he visited the Palestinian Territories and Israel, making an unscheduled stop at the barrier separating Israel and the West Bank.The pontiff descended from his popemobile when it drove past the hulking grey concrete wall that Israel erected 11 years ago during a Palestinian uprising that divides Bethlehem from the adjacent Jerusalem.Israel says the wall is needed for security reasons.The pope spent several minutes under the shadow of an Israeli watchtower and appeared to say a prayer."Free Palestine", said graffiti near where he paused.Pope Francis made a plea for peace at the start of his pilgrimage to Bethlehem, believed to be by Christians the birthplace of Jesus, saying the prolonged Israel-Palestinian conflict had become unacceptable.A day earlier, Francis had offered prayers at the site in Jordan where tradition says Jesus was baptised. He then made an urgent appeal for an end to the civil war in Syria."We are very touched by the tragedies and pains that are especially provoked by the conflicts in the Middle East. I'm thinking first and foremost of the beloved Syria. Begun as a fight between brothers that has lasted three years now and has produced many victims forcing millions to become refugees," the pope told an audience at a church near the Jordan River.A champion of the downtrodden, Francis visited the island of Lampedusa in southern Italy in July 2013 to pay tribute to hundreds of migrants who had died crossing the sea from North Africa. In 2014, he met with survivors and some of the relatives of 366 migrants killed in a shipwreck off Lampedusa the year before. The pope has called for countries to join forces to help the rising number of migrants who take perilous journeys to flee poverty and war.The highlight of 2015 for many of the Roman Catholic faithful was Francis' trip to Cuba -- on the back of his diplomacy to help thaw relations between the Caribbean island and United States -- where he met with revolutionary leader Fidel Castro, and his visit to the U.S. itself.His appearance at the White House with Obama was followed by several huge masses and prayer services and much contact with crowds who thronged to greet him.He addressed the United Nations General Assembly, calling on world leaders to eliminate nuclear weapons and praising the recent Iran nuclear deal; he attacked "boundless thirst" to wealth and power, saying greed was destroying the Earth's resources and aggravating poverty.His approach has proven a hit with the faithful. He appears comfortable with children and has surprised priests and football fans alike by inviting them onto his popemobile.The winner of the Nobel Peace Prize will be announced on October 9.sign up to our newsletter