Leaders of the Catholic Church in Israel and the Palestinian Authority have expressed great excitement for the canonization of the nuns. 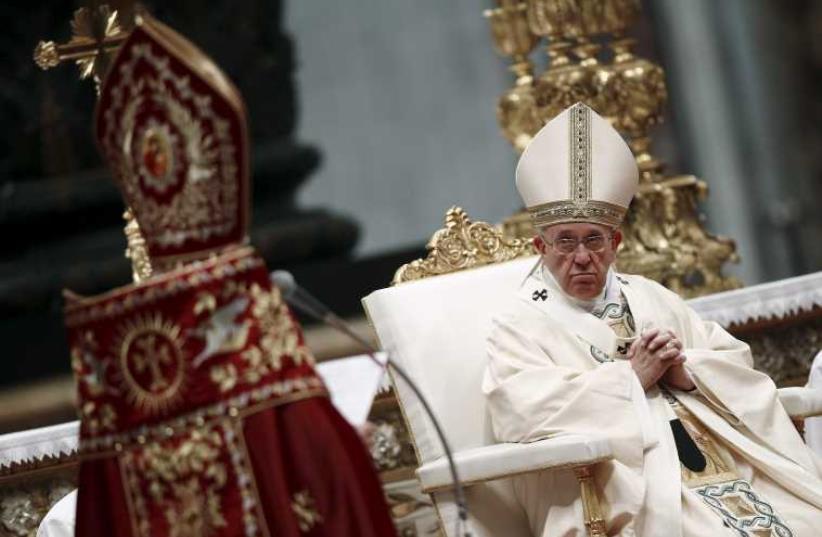 Pope Francis listens as the Patriarch of the Armenian Catholic Church Nerses Bedros XIX Tarmouni speaks during a mass on the 100th anniversary of the Armenian mass killings in St. Peter's Basilica at the Vatican April 12, 2015.
(photo credit: REUTERS)
Advertisement
Pope Francis will later this month declare as saints two Arab nuns who lived in Ottoman-era Palestine in the nineteenth century the Latin Patriarchate of Jerusalem announced on Wednesday.Leaders of the Catholic Church in Israel and the Palestinian Authority have expressed great excitement for the canonization of the nuns, who will be the first modern-day saints from the region and the first to be Arabic speakers.The two nuns are Mariam Barwadi who was born in the Galilee in 1843 and Marie Alphonsine Ghattas who was born in Jerusalem in 1847.The process to sainthood is extremely long and requires three steps, to be declared “Blessed,” followed by beatification and finally canonization. Barwadi was beatified in 1983, while Ghattas was beatified in 2009.Barwadi was born to a Greek-Catholic family in the village of Ibilin in the Galilee but orphaned aged just two years old. She eventually entered the Carmelite monastery in Pau, in south-western France, and subsequently established two Carmelite monasteries in Mangalore, south-western India, and in Bethlehem, where she died in 1878.Ghattas is renowned for her work with the poor of the region during her lifetime and for  establishing the Roasry Sisters order of nuns in Jerusalem.Speaking at the Christian Media Center in the Terra Sancta College in Jerusalem, Bishop William Shomali of the Latin Patriarchate of Jerusalem said that the canonisation of the Barwadi and Ghattas was proof “that our Holy Land is capable of holiness and continues to be Holy not only because of the holy places it hosts but also because of the good people who live here.”“The two saints lived in Palestine before it was divided,” he continued. “They did not know the Israeli Arab conflict. I am sure they follow our situation from heaven and will continue to intercede for peace and reconciliation in the Holy Land. Their intercession is strong and efficacious.”sign up to our newsletter