"We must use our faith to protect the Earth," says WCC head. 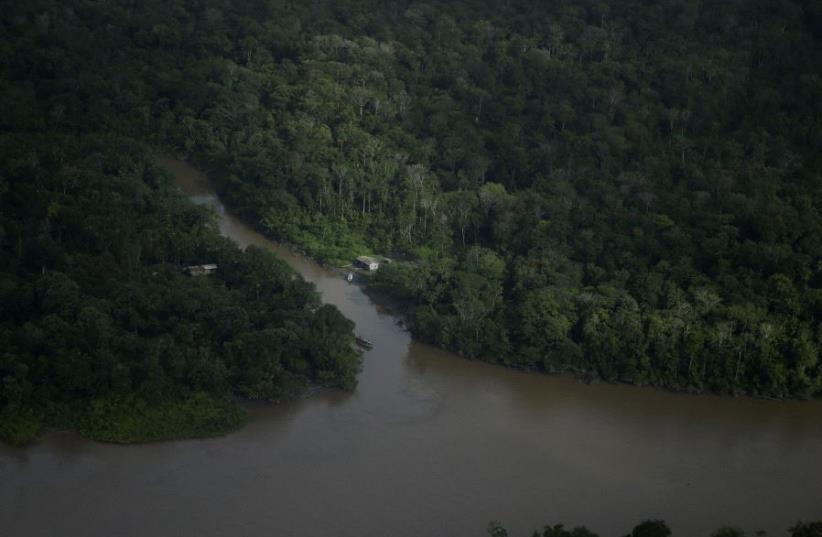 The Amazonas River on the coast of Amapa state
(photo credit: REUTERS/RICARDO MORAES)
Advertisement
Setting aside their religious differences, Christian, Muslim, Jewish, Hindu, Buddhist and Daoist leaders have launched a global effort to end deforestation.Launching the Interfaith Rainforest Initiative at a conference in Oslo on June 19-21, religious and indigenous leaders from 21 countries spoke with forest advocates, climate scientists and human rights experts to develop goals and actions, along with milestones to mark their progress. They expect to follow up with an action plan and a global interfaith rainforest summit in 2018.“The story of creation in the book of Genesis tells us of trees that are beautiful to behold and a source of sustenance. Rainforests are pivotal for life on earth, provisioning people’s needs, promoting biodiversity and protecting the climate”, said World Council of Churches general-secretary Rev. Dr Olav Fykse Tveit. “Today when the rainforests are threatened by deforestation driven by a shortsighted, profit-oriented economy, we must use the knowledge of what is good and our faith-driven action to protect and care for the rainforests and therefore the Earth and all life.”The leaders said the initiative will bring needed moral attention and spiritual commitment to bear on global efforts to end deforestation and protect the tropical rainforests – forests that are fundamental to human life, the planet’s health and reducing the emissions fueling climate change.This marks the first time religious leaders from a broad spectrum of faiths are working hand-in-hand with indigenous peoples, the world’s leading rainforest guardians, to call upon and activate billions of people of faith worldwide to stand up for rainforests. The gathering was attended by His Majesty King Harald V of Norway.Tropical rainforests in South America, sub-Saharan Africa and Asia are falling rapidly due to a range of forces, including palm oil plantations, cattle, soy and crop production, and rapacious and often illegal mining and logging operations. The losses amount to an area the size of Austria each year.With their capacity to store billions of tons of carbon, the preservation of tropical rainforests is widely viewed as fundamental to halting climate change. Many climate experts note that forests are the only proven approach for capturing and storing large amounts of carbon. Thus, staving off their destruction could keep carbon emissions at bay, buying time for the world to transition to a low carbon energy future, and also playing an indispensable role in reaching global carbon neutrality in the second half of this century.Tropical rainforests also provide food, water and income to 1.6 billion people. They contain most of the planet’s land-borne biodiversity and help regulate rainfall and temperature globally, regionally and locally.The group was convened by Norway’s International Climate and Forest Initiative, Rainforest Foundation Norway and the United Nations Development Program, in cooperation with the Forum on Religion and Ecology at Yale University, GreenFaith, the Parliament of the World’s Religions, Religions for Peace, REIL Network and the WCC.“Our goal – working in concert with the spiritual and indigenous leaders gathered here – is to define a shared action plan to create a popular movement for expanded political will and on-the-ground action to protect rainforests,” said Bishop Emeritus Gunnar Stålsett, honorary president of Religions for Peace. “The scope of this initiative is global. But we are also putting special focus on religious and indigenous leaders, networks and institutions in countries with the most significant tropical rainforests.”The initiative is linked to a surge of recent grassroots action in which environmental, climate and indigenous rights issues are being embraced as spiritual imperatives that strike a chord with multiple faiths and traditions. Other leaders of Evangelical Christian and Muslim organizations, and the Archbishop of Canterbury, have stressed the shared human responsibility to protect the planet. Lending crucial leadership and indispensable momentum to these efforts was the official letter issued in 2015 by Pope Francis that called on all people of the world to quickly bring, “the whole human family together to protect our common home.”The pope also noted the unbreakable link between indigenous peoples and the environment.“For them land is not a commodity, but rather a gift from God and from their ancestors who rest there, a sacred space with which they need to interact if they are to maintain their identity and values.”sign up to our newsletter