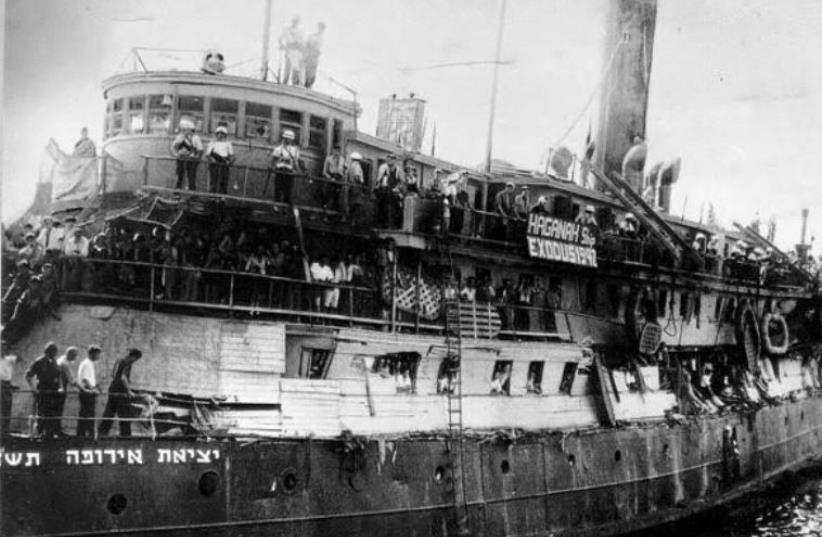 The 'Exodus' following the British takeover
(photo credit: Wikimedia Commons)
Advertisement
Two years after the end of the Holocaust and the Second World War, more than 4,500 Jewish passengers took to the open seas to reach their home in the Land of Israel. On July 11, 1947, the ‘Exodus’ (known as the ‘SS President Warfield’ before the crew changed the ship’s name mid-way through the voyage) set sail from the port of Sète near Marseilles, with the hopes of reaching the Holy Land. The ship’s passengers, of who most were Holocaust survivors, never had a real chance to make it to Mandatory Palestine. From the moment the ‘Exodus’ set sail, the British had placed a special surveillance on the vessel to deter all other attempts to illegally immigrate to Palestine. Throughout its journey, a total of five British destroyers, an airplane and a cruiser had all followed the ‘Exodus,’ with a destroyer even ramming it in international waters before it would try to make a run for the shores of Palestine and unload its passengers. Royal Navy sailors boarded the boat, and in the ensuing skirmish three of the passengers were killed and dozens were wounded.Battered and bruised, the ship continued, however. And on July 18, 1947, as the ship reached the territorial waters of Mandatory Palestine, the British finally put a halt to the voyage. Soldiers boarded the ‘Exodus 1947,’ removing all the passengers and loading them onto British deportation ships, where they were sent back to Europe.  Upon arriving in France, the ships remained in port, being refused to disembark, and the British subsequently sent them to Germany.But after the world had seen the cruelty of sending Holocaust survivors back to Europe to displaced persons camps, the British changed their policy and began sending the illegal immigrants to detention camps in Cyprus. Investigative journalist and author Gordon Thomas wrote in ‘Operation Exodus’ that “The Exodus crew and passengers were united by a moral certainty that what they were doing was something almost mystical: the right of return to ‘Eretz Yisrael’ (the Land of Israel) became the reason their fathers and elder brothers had fought Nazi oppression.The 'Exodus' will forever be remembered for the unbreakable desire the Jewish People have to return to the land of their forefathers.  To learn more about the building of the modern State of Israel as envisaged by the prophets of the Bible, check us out at @christian_jpost, on Facebook.com/jpostchristianworld/ and see the best of the Holy Land in The Jerusalem Post - Christian Edition monthly magazine.
Sign up for our Christian World newsletter >>