On September 11, 1921, Zionist pioneers founded the moshav Nahalal in the Jezreel Valley. 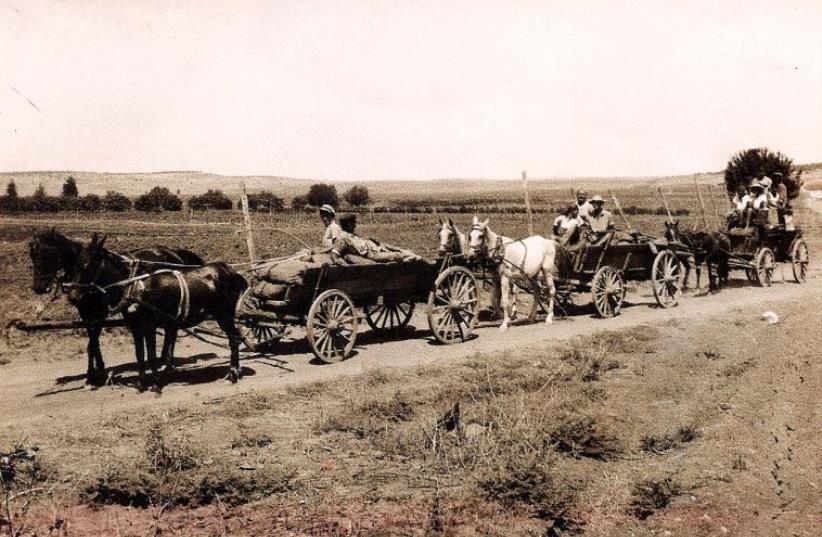 The first settlers arrive to Nahalal by horse and wagon from Mikveh Israel
(photo credit: Wikimedia Commons)
Advertisement
Answering the Prophet Hosea’s call to “respond to Jezreel,” on September 11, 1921, Zionist pioneers founded the moshav Nahalal in the Jezreel Valley.
A moshav is a communal farming village, yet different from a kibbutz in that farms were independently owned.
Nahalal, a Levitical city belonging to the Tribe of Zebulun is mentioned in Joshua 19:15, and its current location is 6 km. (3 mi.) west of Nazareth, in the northern part of the valley region.
The name Nahalal comes from the word “to lead,” with the connotation of leading to water. This root appears several times, such as in Psalm 23:2, “he leads me beside quiet waters,” and as the Prophet Isaiah writes in 49:10, “He who has compassion on them will guide them and lead them beside springs of water.”
Zebulun, who had a ship as its tribal symbol and was blessed by Moses that they would “feast on the abundance of the seas,” had no port. Therefore, it was very appropriate that the tribe would pray for God to help it succeed in bringing its goods to and from the Mediterranean Sea.
In the anthology “Legends of Galilee, Jordan and Sinai,” Israeli geographer and author Zev Vilnay relates a story from the Jerusalem Talmud of one of the inhabitants of Mahalul (Ma’alul), a village next to the moshav that was identified with the ancient city of Nahalal. The man, Tartori, became famous for his piety because “he used to go up to Jerusalem every Sabbath to make his devotions at the Great Temple.”
The Jewish settlers experienced great agricultural success in the region and began to expand territorially. According to the 1945 Mandatory Palestine Village Statistics surveyed by the British Government Office of Statistics, almost 60 percent of the nearby village’s land was now in Jewish hands.
During the War of Independence, Israeli soldiers faced a harsh resistance from the residents of Ma’alul. On July 15, 1948, however, the Golani Brigade succeeded in breaking the stalemate, achieving victory and recapturing the village. The residents fled the village, mainly to Nazareth and nearby Kfar Yafia.
Two churches, Greek Orthodox and Catholic, remained intact, and descendants of former Ma’alul residents administer service there.
Today, Nahalal has become a bastion of coexistence. The moshav hosts the Maccabi Haifa-Nahalal youth football academy, where Jews, Circassians, Muslim Arabs and Christian Arabs play on the same team.
Israel’s first astronaut Ilan Ramon is buried in the Nahalal cemetery in the first communal moshav in the region, and the famous Second World War parachutist Hannah Szenes was also a resident for the short time that she lived in Israel.
The moshav continues to thrive until this day, though not as the socialist settlers had thought it would when they established the country’s first cooperative agricultural settlement. It does, however, remain a symbol of the Jews’ return to Israel and the blessing God has provided them.
To learn more about the building of the modern State of Israel as envisaged by the prophets of the Bible check us out at @christian_jpost, on Facebook.com/jpostchristianworld/ and see the best of the Holy Land in The Jerusalem Post - Christian Edition monthly magazine.
Sign up for our Christian World newsletter >>