The German officer who saved 13 Jewish 'spies' from the Nazis

Seeing the Nazi treatment of the Jews played a key part in Hans von Dohnanyi’s growing opposition to Hitler. 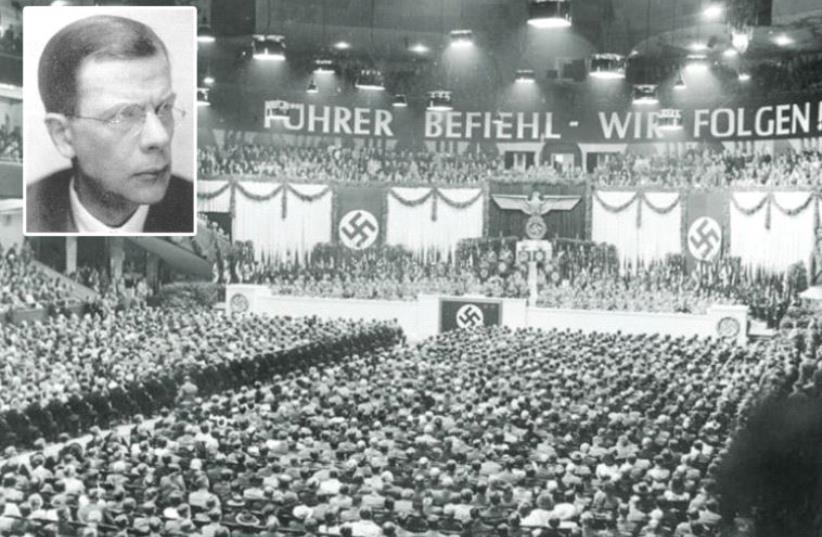 Hans von Dohnányi
(photo credit: JORIC.COM/WIKIMEDIA)
Advertisement
In the middle of the World War II, German jurist and military intelligence officer Hans von Dohnanyi conceived of a daring idea to help some of his Jewish friends escape the Nazis.Abwehr Chief Admiral Wilhelm Canaris encouraged the members of his German military intelligence unit to help save as many Jews as possible, and along with General Hans Oster, von Dohnanyi came up with Operation U-7, a clandestine plan to smuggle 13 Jews out of the Nazi Reich.Seeing the Nazi treatment of the Jews played a key part in Dohnanyi’s growing opposition to Hitler, and he was more than willing to lead the humanitarian action.In the fall of 1941, they devised a plan to disguise 13 Jewish refugees as Abwehr agents who were being disguised as Jewish refugees in order to smuggle them into the US in order to spy for the German government.It took over a year to plan and to execute, including obtaining the permission of SS commander Heinrich Himmler, and on September 29, 1942, the Jewish "spies," with special identity cards and passes traveled from the Berlin Zoo Train Station, arriving in Switzerland shortly after paying them an amount totaling about $100,000 drawn from secret military intelligence funds.Von Dohnanyi, who had seen the work of the Nazis ever since their rise to power in the early 1930s, reached the conclusion by himself to help Jews and to try to cause the downfall of the Nazis, but he was also blessed to have an outspoken brother-in-law who was on the same the ideological path to martyrdom as he was.Dietrich Bonhoeffer, a theologian who was an outspoken dissident of the Nazi regime, left Germany in 1938 to save himself from having to fight in Hitler’s army. He said that he must live through the war, otherwise he will have no right to participate in the reconstruction of Christian life in Germany after the war if he doesn’t share the trials with his people.“Christians in Germany will have to face the terrible alternative of either willing the defeat of their nation in order that Christian civilization may survive or willing the victory of their nation and thereby destroying civilization,” Bonhoeffer wrote.During the war, the pastor spoke out against the persecution of the Jews and his Bethel Confession adamantly refuted the Nazis’ Deutsche Christen (German Christian Protestant group) doctrine, saying Israel’s spot in history can not be usurped and that no nation is obligated to avenge the Jews’ role in the killing of Jesus.Dohnanyi wasn’t only interested in the present, however, and during his time in the Bavarian Justice Ministry he also tried to ensure that the Nazis would be brought to justice after the war would end.“With cool-headed efficiency and rising outrage Dohnanyi began to keep a chronological record, along with supporting evidence and an index, of the regime’s illegal acts,” authors Elisabeth Sifton and Fritz Stern wrote in "No Ordinary Men: Dietrich Bonhoeffer and Hans von Dohnanyi, Resisters Against Hitler in Church and State.“ "These documents were meant to facilitate the prosecution of Nazi criminals after the end of the regime.”On April 5, 1943, the Gestapo arrested von Dohnanyi, but he was soon after released, however, as the Nazis had a lack of evidence against him in the role he played in Operation U-7.The experience didn't deter him, and von Dohnanyi continued in his attempt to overthrow the Nazi regime. His efforts would culminate in the failure of the July 20, 1944 bomb plot – also known as Operation Valkyrie – an attempted coup d'etat led by Claus von Stauffenberg to assassinate Adolf Hitler and make peace with the West.The Gestapo found von Dohnanyi's records on the Nazis' misdeeds, and a month before the Allied victory, in April 1945, he was hanged with piano wire.What made Dohnanyi's efforts even more remarkable was that he had a Jewish grandfather. While this fact was not able to discredit him from his positions, it did not help to relieve the suspicion of the Gestapo. “In accordance with his racial composition - which indeed you cannot tell by his external looks - he has no understanding for the racial legislation of the Third Reich, to which he is internally opposed," said Friedrich Arnold, a Jewish lawyer saved by Dohnanyi said of his beliefs. "Thus he expressed the view that the racist position of National Socialism is impossible because it contradicts the Christian view of the Protestant Church.”In a ceremony in Berlin on October 26, 2003, Yad Vashem posthumously recognized von Dohnanyi as a Righteous Among the Nations for saving the lives of 13 Jews.Prior to his death, Dohnanyi said that he did what he did because he was “on the path that a decent person inevitably takes.” To learn more about Jewish-Christian relations, check us out at @christian_jpost, on Facebook.com/jpostchristianworld/ and see the best of the Holy Land in The Jerusalem Post - Christian Edition monthly magazine.
Sign up for our Christian World newsletter >>