Commemorating one of the United States' Founding Fathers, whose dream of a Jewish state exceeded expectations. 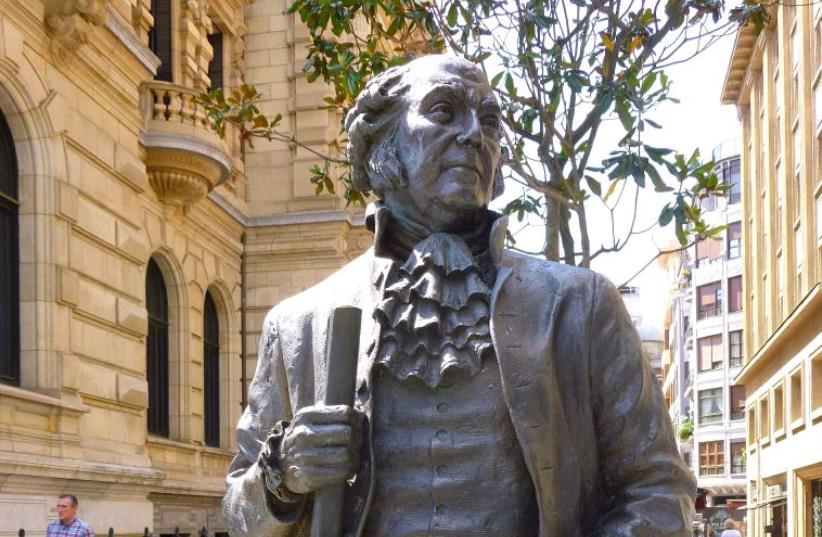 A John Adams statue in Bilbao, Spain.
(photo credit: Wikimedia Commons)
Advertisement
A disciplined army of 100,000 Israelite's would conquer their ancient homeland and establish an independent nation in Judea, the second president of the United States once imagined.“I could find it in my heart to wish that you had been at the head of a hundred thousand Israelite's indeed as well disciplined as a French army – & marching with them into Judea & making a conquest of that country & restoring your nation to the dominion of it,” John Adams wrote in March 1819 to Mordecai M. Noah, a leading member of the American-Jewish community and an early Zionist. “For I really wish the Jews again in Judea an independent nation.”The relationship between the US and Israel reached a high point in the recognition of the nascent State of Israel in 1948, but the American dream of helping the Jewish people achieve statehood goes back to the early days of the Land of Opportunity. According to Ilka Kreimendahl in "Peacemaker USA?: The Role of the United States in the Arab-Israeli Conflict in the 1990s," Adams's statement was the "first pro-Zionist declaration that was ever made by an American president."Adams, who was born on October 30, 1735, in Braintree, Massachusetts, grew up in a household based on Puritan values. The Puritans believed themselves to be like the Israelite's fleeing Egypt, wandering into the vast and unknown wilderness and reaching the promised land of the New World.As their guide, they used the Bible, adopting biblical customs, established biblical codes, such as observance of the Sabbath, and gave their children Hebrew names.In an 1808 letter he wrote on French Enlightenment philosopher Voltaire's description of the Jews, Adams made his respect for the Jewish people clear."They are the most glorious nation that ever inhabited this Earth," he wrote to the Dutch Patriot leader and American immigrant François Adriaan van der Kemp. "The Romans and their Empire were but a Bauble in comparison of the Jews. They have given religion to three quarters of the Globe and have influenced the affairs of Mankind more, and more happily, than any other Nation ancient or modern.”It was this use of and familiarization with the Bible in a new territory that was not bound by any past religious beliefs that helped found the beginnings of the Jewish Restoration movement, which calls for the return of the Jewish Nation to Israel and is a fundamental tenet of the modern Christian Zionism beliefs.“John Adams’s interest in the Jewish people grew out of his knowledge of their biblical past, somewhat tempered by democratic ideas of the revolutionary age,” writes Egal Feldman in “Dual Destinies: The Jewish Encounter with Protestant America."These beliefs and knowledge of the Bible that the American people have, continue to support the flourishment of strong US-Israeli ties till this day, with President John Adams helping establish this fact in the highest and most powerful office in the country – the Executive Office of the President of the United States.Adams's dream didn't just come true, though. It exceeded expectations. The Jewish people not only established a state in Judea, but also in Samaria, the Negev, the Galilee and the Golan, among other regions, with a current army of more than 150,000 soldiers and more than three million reserves ready for military service. To learn more about the role of the Bible in history and the roots of Christian Zionism, check us out at @christian_jpost, on Facebook.com/jpostchristianworld/ and see the best of the Holy Land in The Jerusalem Post - Christian Edition monthly magazine.sign up to our newsletter