Gunman opens fire at the historic African-American church in downtown Charleston; is still at large, US police say. 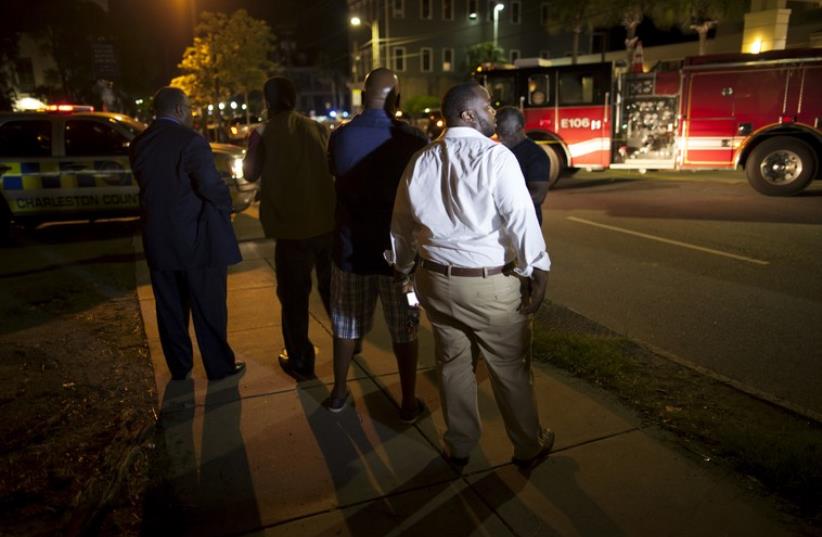 Police respond to a shooting at the Emanuel AME Church in Charleston, South Carolina June 17, 2015
(photo credit: REUTERS)
Advertisement
CHARLESTON, SC - Nine people were killed when a white gunman entered a historic African-American church in Charleston, South Carolina, and opened fire, the city's police chief said on Thursday.One other person was wounded and taken to a hospital, Chief Gregory Mullen told reporters about four hours after the shooting on Wednesday evening.Describing the shooting as a hate crime, Mullen said: "It is unfathomable that somebody in today's society would walk into a church when people are having a prayer meeting and take their lives."He also said that an all-clear had been sounded after an earlier bomb threat in the area of the church."This is an unspeakable and heartbreaking tragedy in this most historic church, an evil and hateful person took the lives of citizens who had come to worship and pray together," Charleston Mayor Joe Riley told the Post and Courier newspaper in South Carolina.Charleston Police Department spokesman Charles Francis said the shooting occurred at the Emanuel AME Church around 9 p.m. local time.  The suspect was described as a 21-year-old white man wearing a sweatshirt, jeans and boots, Charleston police said in a message on Twitter.A bomb threat was later reported near the scene of the church shooting, Charleston County Sheriff's Office spokesman Eric Watson said. People who were gathered in the area were told by police to move back.A police chaplain was present at the scene of the shooting, and a helicopter with a searchlight hovered overhead as officers combed through the area.A group of several men stood in a circle in front of a hotel near the church. "We pray for the families, they've got a long road ahead of them," Reverend James Johnson, a local civil rights activist, said during the impromptu prayer service.Police took a man with a backpack and a camera into custody, but later said they were still searching for a suspect in the shooting, television station WCIV reported.Local broadcaster WCSC reported the FBI was on the scene. The FBI could not be reached immediately for comment.The website for the church said it has one of the largest and oldest black congregations in the region. It was built in 1891 and is considered a historically significant building, according to the National Park Service.The church is led by the Reverend Clementa Pinckney, who also serves in the state senate, according to the church's website. sign up to our newsletter