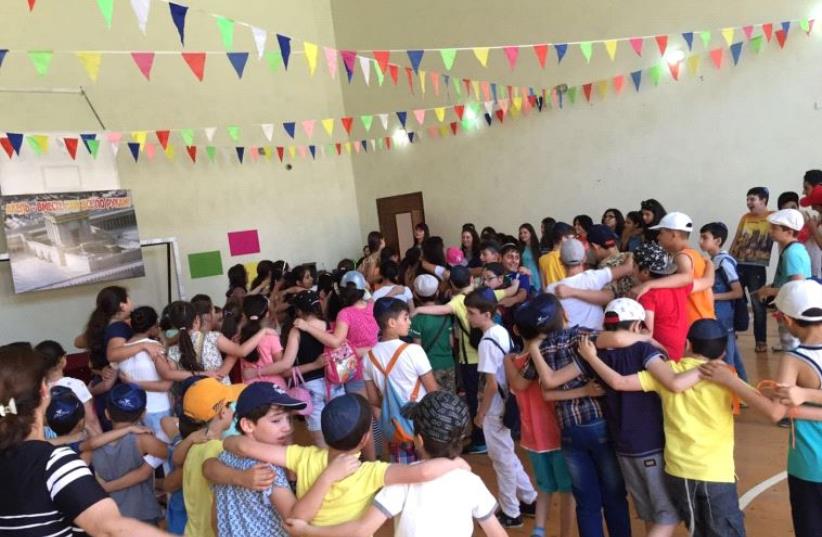 Children from the former Soviet Union at an IFCJ-sponsored camp. (FJC)
(photo credit: FJC)
Advertisement
More than 5,000 Jewish children from the former Soviet Union began attending 61 summer camps with Israeli and American counselors recently.The Federation of Jewish Communities of the Commonwealth of Independent States organized the programs, with the financial assistance of the International Fellowship of Christians and Jews. “Today we take the opportunity to reflect on the unique influence the camps have had on shaping the future of post-Soviet generations of Jewish children. The camps have been a vital part of the revival of Jewish life in the FSU,” said Daniel Gordon, the FJC’s resource development and PR coordinator. “We also consider how we can further develop to go hand-in-hand with today’s youth and their changing needs.”The children, ages 5-15, came from eight countries, including Russia, Georgia, Ukraine and five others, and all come from impoverished backgrounds. For many of them, this summer program is the only opportunity they have to be in contact with Jewish values and to identify as Jews. The counselors are all members of the youth movement EnerJew, which strives for community activism and the creation of a deep connection to Jewish tradition and culture.“The camp staff tries to devote honest and personal attention to every child, make them feel they are in a warm, loving and embracing environment – which is the exact opposite experience most of the children have in their home, which, unfortunately, has been broken up,” said Haim Friedman, the CEO of the Or Avner educational network in the former Soviet Union.The FJC camps combine educational experiences with day trips and summer attractions. These included many sporting activities, cooking and woodworking workshops, cultural and artistic activities, classes on Judaism and much more. The camps’ content is specifically designed for the children of the former Soviet Union, and it strengthens their connection to Judaism, heritage, Jewish culture and the Land of Israel. The kids receive hot and nutritious meals with healthy and refreshing fruit snacks, which for many is their main source of nutritious food.The Fellowship is the driving force behind the summer program, allowing all children to participate free of charge, with Friedman saying the Fellowship is an organization that knows how to get things done.“They know how to identify how the grants they provide will be utilized in the best way,” he said. “The Fellowship’s financial backing allows for us to provide thousands of children with hot and nutritious meals every day, dental treatment, psychological and medical help, and in the past few years to support the children refugees from the fighting in eastern Ukraine with all of their needs. “These children are suffering from poverty, and many of them have lost relatives and they have been uprooted from their homes."Many of the children's parents have lost their sources of income, and even now they are living with constant fear, due to the proximity of fighting.“For these children, the summer camp is a Garden of Eden, and it rebuilds the faith they had lost in humanity. Here they are visited by medical professionals, they engage in pep talks, receive clothing packages and get a caring attitude from the counselors, who were specially recruited for the children.“The IFCJ pushed us to do everything we could so that the Ukrainian refugees could participate.”
Translated By Benjamin Glatt.
sign up to our newsletter