Sir Charles Wilson’s cartographic work in 1864 served as the basis for all future research of the Holy City. 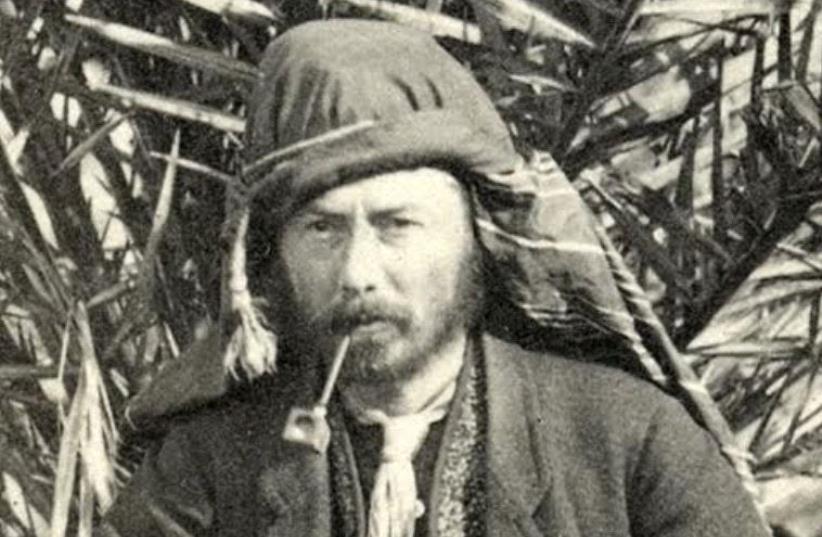 Wilson in the Sinai in 1869.
(photo credit: PEF)
Advertisement
Prior to the mass waves of immigrants to the Holy Land in the late 19th century, the nations of the world were already preparing the ground for the future return of the Jews to the Holy City of Jerusalem. In 1864, co-founder of the Palestine Exploration Fund George Grove and Baroness Angela Georgina Burdett-Coutts of London commissioned a group of Royal Engineers to carry out the Ordnance Survey of Jerusalem, the first modern mapping of the Holy City.The mapping was a necessary precondition to the baroness’ ambitious project to improve the city’s water foundations, in order to make settling the area a reality.On September 12, 1864, Cpt. Charles Wilson led the group of Royal Engineers to Jerusalem, witnessing the barren land that was once the great Kingdom of David and Solomon. “I was quite unprepared for the wild desolation of the scene around us,” he wrote in a letter, compiled into his biography, “The life of Major-General Sir Charles William Wilson, Royal Engineers,” by Sir Charles Moore Watson. Upon reaching Jerusalem, the future knight was even more disgusted – especially in face of the “immense pile of ugly buildings” that the Russians built outside the Old City. But the disgust quickly turned to amazement, as Wilson saw the whole history of the Holy City right in front of his eyes.“But other feelings came over me on looking down on a spot where such momentous events have taken place, and I do not believe that even an infidel or an atheist could view without emotion those few acres of ground where events happened which have had an ever-increasing influence over the actions of the whole human race.”Wilson, who would later serve as chairman for the Palestine Exploration Fund, greatly succeeded in mapping Jerusalem, especially considering the fact that the Ottomans were ruling over Palestine, and in addition to his geographical work he was also taking the opportunity to do reconnaissance operations for the British Empire. Wilson also took part in archeological excavations during his time in the region, discovering most famously what would become known as “Wilson’s Arch” at the Western Wall, among other finds.“I have been doing a great deal of underground work lately, and have been rewarded by several discoveries, the most important being an entire arch of one of the approaches to the Temple in a beautiful state of preservation, and a fine portion of the old wall. It is rather dirty work , crawling about in the middle of the earth, but very interesting.”He also served as director of the Palestine Pilgrims’ Text Society, a company that specialized in publishing texts and translations related to pilgrimages to the Holy Land, and he published “Picturesque Palestine, Sinai and Egypt,” a travel book featuring vivid descriptions and illustrations of the Holy Land and the neighboring areas. On October 25, 1905, Wilson died at Tunbridge Wells, in the southern United Kingdom. The water project never amounted to anything, but Wilson’s work on the Jerusalem Ordnance Survey served as the basis for all future Jerusalem research.In the preface to the biography on Wilson, Watson wrote that Wilson “probably did more than any other man to increase the knowledge of the geography and archeology of Asia Minor, Palestine and the adjacent countries.”To learn more about Jewish-Christian relations, and the building of the modern State of Israel as envisaged by the prophets of the Bible check us out at @christian_jpost, on Facebook.com/jpostchristianworld/ and see the best of the Holy Land in The Jerusalem Post - Christian Edition monthly magazine.
sign up to our newsletter