Industrialist Alfred Rossner stood out for the kindness he showed to those under his command. 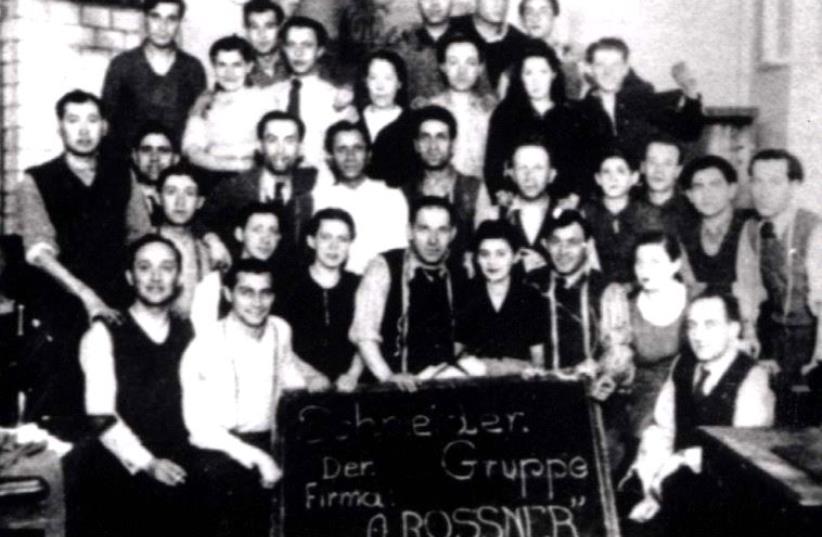 Alfred Rossner's workshop.
(photo credit: YAD VASHEM)
Advertisement
After the Germans invaded Poland in the Second World War and had confiscated factories owned by Jews, the Nazis put trustees in charge of the plants to manufacture equipment for the Third Reich.German industrialist Alfred Rossner, who in 1939 moved to the Polish town of Bedzin, in southern Poland, just outside of Krakow, was spotted by the Nazis as a trustworthy businessman to run the large confiscated plants. Rossner had worked for a Jewish textile factory owner in Berlin, and as a result became very well-known in the industry, both with German and Jewish administrators. Even his former Jewish boss moved to Bedzin after he was expelled from Germany in 1938, making him all the more well-connected to the city's textile business. For three years Rossner was in charge of almost 10,000 Jewish workers. And he wasn't afraid to use his power - for good. "In contrast to other German-appointed managers, who only thought of ways to enrich themselves, Rossner cared principally for his workers, and exerted himself to save them," writes Holocaust historian and author of "Saving the Jews: Men and Women who Defied the Final Solution," Mordecai Paldiel, who he himself was saved as an infant from the Nazis by a Catholic priest. While Rossner may not have been as successful as another, more famous factory manager, namely Oskar Schindler, Rossner's efforts were no less impressive.To communicate with the Jewish workers, he had taken the trouble to learn Yiddish, giving them the feeling that even though they were tasked with making uniforms for the SS - the paramilitary organization that was the main Nazi organization responsible for the deportation and execution of the workers' Jewish brethren - Rossner was doing all that he could to save as many Jews as he could. Survivor Henrietta "Kitia" Altman, who was saved by Rossner, remembers that with the limited resources that Rossner had, he managed to save a lot of people."It is not a story of spectacular rescues and achievements, but a story of desperate attempts." What also stood out was his love for Yiddish, Altmann says."She was surprised by his affinity to the Yiddish language, taught to him by one of his Jewish section chiefs, who read to him in Yiddish some of the works of the famed Shalom Aleichem." Altman also remembers that Rossner would go around the streets of the town in his one-horse buggy calling out in Yiddish to ignore the orders of the Judenrat and refuse to be rounded up.In December 1943, the Gestapo finally caught up with Rossner, and he was hanged in January 1944. Only in 1994, after Altman had the courage to speak out about her experiences was Yad Vashem able to corroborate Rossner's story. On September 28, 1995, Yad Vashem honored Rossner as a Righteous Among the Nations.According to Yad Vashem’s Righteous Among the Nations database, there are more than 25,000 recorded and proven stories of Gentiles helping and rescuing Jews during the Second World War. And these numbers only represent the documented accounts, not including those that haven’t come to light yet.Not many of them, however, have been recorded as having performed their heroic acts speaking Yiddish.To learn more about Jewish-Christian relations, check us out at @christian_jpost, on Facebook.com/jpostchristianworld/ and see the best of the Holy Land in The Jerusalem Post - Christian Edition monthly magazine.
sign up to our newsletter