An undercover investigation led by the police and the Shin Bet began immediately after the torching, and led to the arrests of the three youths suspected in setting the fire. 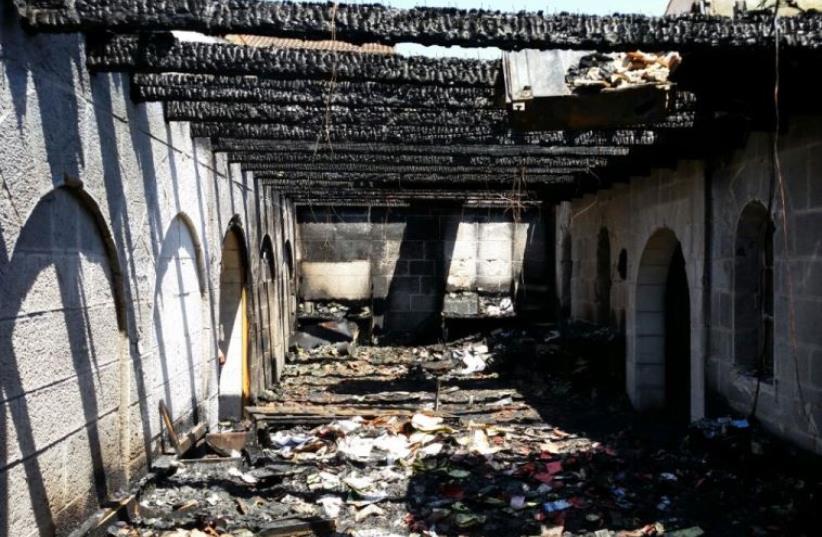 Suspected arson on Church of the Multiplication in the Galilee
(photo credit: BEN HARTMAN)
Advertisement
The Shin Bet and Judea and Samaria police detectives have arrested suspects in the torching of a church near the Sea of Galilee last month, which investigators believe was a hate crime.The fire at the Church of the Multiplication of the Loaves and Fish left the building gutted and sent two people to the hospital suffering from smoke inhalation. Hebrew graffiti sprayed on a wall denounced the worship of idols.
Suspected arson on Church of the Multiplication in the Galilee
On the day of the arson, more than a dozen minors found near the site were detained and questioned but later released.Though the police did not release any details about the suspects, “Honenu,” an organization that gives assistance to Jews accused of acts of violence against Arabs, said three adults were arrested Saturday night.Aharon Roza, an attorney from Honenu, said the three have been banned from meeting with their attorneys, and accused investigators of trying to force them to confess.The suspects were arrested Saturday night by police and Shin Bet investigators. Around the same time of the arrest, police sent out a statement saying that the gag order is still in effect and covers any developments in the case, including arrests.The suspects were brought to the Nazareth Magistrate’s Court on Sunday afternoon, where their remand was extended until Friday.The church is believed by Christians to be the site where Jesus performed the Miracle of the Multiplication of the Loaves and the Fishes, and is a very popular pilgrimage site for Christians.The Tag Meir anti-racism organization welcomed news of the arrests, saying that “the investigation must be exhaustive and indictments served against anyone trying to ignite a religious war in the State of Israel.”
Sign up for our Christian World newsletter >>