Today in History: Benjamin Franklin and the Bible 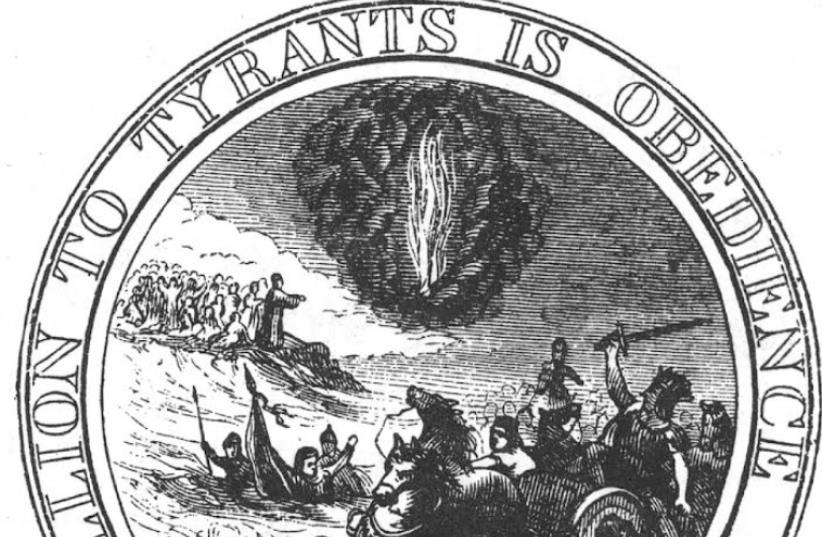 Interpretation of the first committee's seal proposal, made by Benson Lossing in 1856, almost 100 years after Franklin's proposal.
(photo credit: Wikimedia Commons)
Advertisement
Founding father Benjamin Franklin, who was born in Boston on January 17, 1706, was at the forefront of the 13 Colonies’ movement to create a society based on biblical principles, which played a crucial role in the establishment of the United States. “The First American” was a passionate Puritan, supporting the Evangelical movement and believing that the Bible’s values of freedom for all must be applied to the nascent state. Franklin was so inspired by the message of the Bible that during the US Seal Committee’s deliberations, the renaissance man proposed that the national insignia be composed of the dramatic scene of the Israelites’ exodus from Egypt. “Moses standing on the Shore, and extending his Hand over the Sea, thereby causing the same to overwhelm Pharaoh who is sitting in an open Chariot, a Crown on his Head and a Sword in his Hand. Rays from a Pillar of Fire in the Clouds reaching to Moses, to express that he acts by Command of the Deity. Motto, Rebellion to Tyrants is Obedience to God,” he wrote.The committee was impressed with the idea and recommended Franklin’s proposal for the reverse side of the seal. It was clear however that Franklin, along with committee colleagues Thomas Jefferson and John Adams, had no experience and no concept of what a heraldic seal should be comprised of, and no further action was taken to advance Franklin’s proposal of “Exodus.”Legend also has it that Franklin was interested in replacing English for Hebrew as the official language of the new country. True or not, practically, it wasn’t feasible.Franklin’s devotion to the Bible also accorded him a virtuous stance in relations with the early Jewish settlers. In 1788, the elderly statesman contributed £5 to Philadelphia’s Mikveh Israel synagogue’s building fund.His legacy of devotion to God and Christian principles stands firm today. Today in History:  To learn more about the role of the Bible in history and Jewish-Christian relations, check us out on Twitter at @christian_jpost, on Facebook, and in our monthly Christian magazine, The Jerusalem Post - Christian Edition.
Sign up for our Christian World newsletter >>