First Hebrew city fulfilled prophecy of ‘I will build you up again, and you will be rebuilt.’ 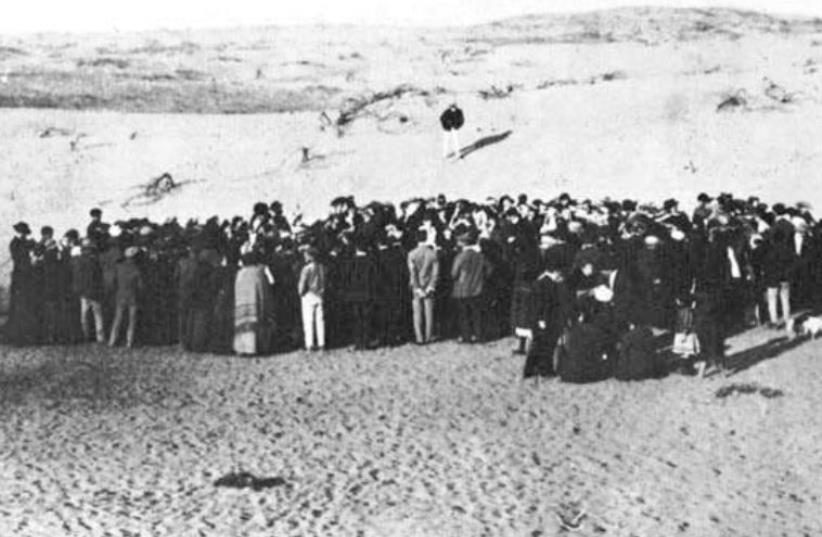 Lottery for building plots in Tel Aviv, 1909.
(photo credit: Wikimedia Commons)
Advertisement
On April 11, 1909, Tel Aviv, the first modern Jewish city was founded.Ever since the time of Bible, including appearances in the books of Joshua, Jonah and 2 Chronicles, there has been a presence in the city of Joppa, or Jaffa as it is called today.In the Middle Ages, the port city changed hands multiple times from the Arabs to the Crusaders and Mamluks, but by the 1880s Jaffa became a well-protected Ottoman port city.
It wasn’t until the prophetic return to Zion in the late 19th century that Jews began settling the area adjacent to Jaffa. Yemeni Jews were some of the first to arrive, and soon after, large numbers of Jewish pioneers from Europe began cultivating the sand dunes.With the arrival of more Zionists at the turn of the 20 century, in 1906, a group of Jewish residents of Jaffa and the nearby agricultural settlements founded a society with the intention of building a modern Jewish city in the Holy Land. Three years later, after the society’s envoy finally was able to purchase the land and register the deeds with the Ottoman Empire, the Zionist pioneers gathered on April 11, 1909, on one of the Mediterranean’s bare beaches to receive their plots. Each member’s name was written on a sea shell, and one by one the 66 Jewish families received their own portion of the Holy Land. And thus, the building of the “first Hebrew city” was underway.The name of the budding metropolis-to-be was stilled called after the society that the pioneers had founded – Ahuzat Bayit, meaning homestead. On May 21, 1910, though, after a long debate, a municipal committee decided that the city would be called Tel Aviv, after the verse in Ezekiel 3:15: “I came to the exiles who lived at Tel Aviv near the Kebar River. And there, where they were living, I sat among them for seven days--deeply distressed.”The committee found that the name was extremely appropriate to express the idea of a Jewish renaissance and the fulfillment of the biblical prophecies of a return to Zion. The word “tel” means an ancient mound composed of remains of successive settlements, and “aviv” is the Hebrew word for spring, symbolizing renewal. The flag and city arms of the city also expressed the idea of renewal, containing a verse from Jeremiah 31:4: “I will build you up again, and you, Virgin Israel, will be rebuilt.”
Today, Tel Aviv has grown from those 66 families to a population of almost half a million people, and is considered one of the top 25 financial centers of the world. More than a million tourists annually visit the “city that never sleeps” to experience the city’s unique culture, cuisine and nightlife. Tel Aviv-Jaffa is also home to a community of more than 4,000 Christians. Both Immanuel Church, a Protestant church in the city’s American–German Colony, and St. Peter’s Church, a Franciscan church in Jaffa, predate the founding of the city.