Recognize the "common spiritual patrimony" that exists between Jews and Christians, pope said. 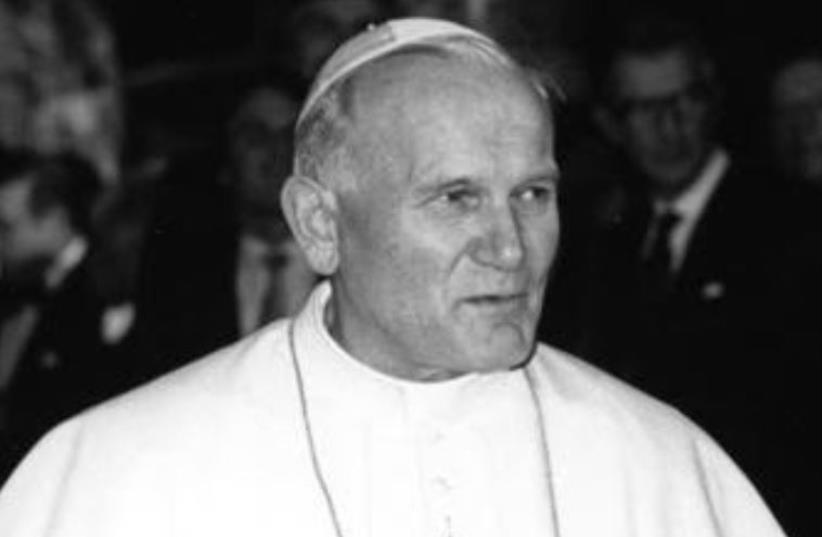 John Paul II
(photo credit: Wikimedia Commons)
Advertisement
On April 13, 1986, Pope John Paul II made the first ever official papal visit to a synagogue. John Paul II visited the Great Synagogue of Rome, where he was greeted by the Italian capital’s chief rabbi, Elio Toaff. In the pope’s opening remarks, he thanked God for the opportunity to have a meeting between the Jewish community and the leader of the Catholic Church and the Bishop of Rome, and when thanking Rabbi Toaff for his cooperation and hospitality, John Paul II told him “todah rabah,” meaning “many thanks” in Hebrew. The pope also took the opportunity to condemn the actions taken against the Jewish people – Christians’ “elder brothers” – in the Second World War.“I would like once more to express a word of abhorrence for the genocide decreed against the Jewish people during the last War, which led to the holocaust of millions of innocent victims,” he said. “Precisely this people, which received from God the commandment, ‘Thou shalt not kill,’ has experienced in itself to a particular degree what killing means. Before this inscription [on the memorial stone in Auschwitz] it is not permissible for anyone to pass by with indifference.” John Paul II was the first head of the Catholic Church to visit the death camp in 1979. One of the pope’s main areas of work as universal pastor of the Catholic Church was Christian-Jewish reconciliation. As a child, the pope grew up playing soccer with his Jewish neighbors in his native Poland, at times playing on the Jewish teams against the all-Catholic teams. In the Rome synagogue, he praised those working to bring the two people together.“Today’s visit is meant to make a decisive contribution to the consolidation of the good relations between our two communities, in imitation of the example of so many men and women who have worked and who are still working today, on both sides, to overcome old prejudices and to secure ever wider and fuller recognition of that ‘bond’ and that ‘common spiritual patrimony’ that exists between Jews and Christians.”Addressing the history of the Catholic Church’s relationship with the Jewish-Roman community specifically, the pope said he wanted more than coexistence, and was hoping to achieve fraternal love. “In doing this, I venture to say, we shall each be faithful to our most sacred commitments, and also to that which most profoundly unites and gathers us together: faith in the One God who ‘loves strangers’ and ‘renders justice to the orphan and the widow,’ commanding us too to love and help them. Christians have learned this desire of the Lord from the Torah, which you here venerate, and from Jesus, who took to its extreme consequences the love demanded by the Torah.”Pope John Paul II is remembered as a friend of the Jews and a world leader in his work to reach Jewish-Christian reconciliation. To learn more about Jewish-Christian relations, check us out at @christian_jpost, on Facebook.com/jpostchristianworld/ and see the best of the Holy Land in The Jerusalem Post - Christian Edition monthly magazine.
sign up to our newsletter