Today in History: Winning Eilat with an ink flag

Israeli soldiers took the city without a battle, but forgot to bring the national banner 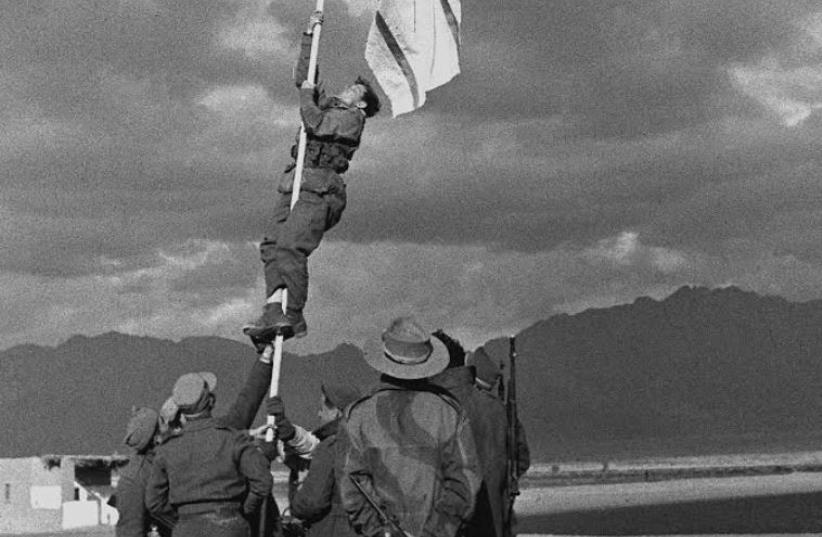 Raising the ink-drawn flag in Eilat. Picture by Micha Perry, an officer in the Negev Brigade, March 10, 1949
(photo credit: Wikimedia Commons)
Advertisement
67 years ago, at approximately 3:30 p.m. on March 10, 1949, Avraham Adan, company commander in the 7th Battalion of the Negev Brigade, raised a makeshift Israeli flag at the abandoned police headquarters in Eilat.This ended Operation Uvdah (Fact) and the War of Independence, which began in May 1948.The 1947 UN Partition Plan had granted the new State of Israel the Red Sea port, but the Jordanian Legion quickly took control of Umm Rashrash, as it was known in Arabic. On the last day of the war’s final operation, after five consecutive days of Israeli victories in the South, Israeli reconnaissance had shown that the Jordanians had already abandoned Eilat. The only battle to take place that day was between the Negev and Golani brigades to see which of the two would be the first to reach the city. During Operation Uvdah, upon realizing that they had no flag, Negev soldiers took a white sheet, drew two ink stripes on it, and sewed on a Star of David that was torn off a first-aid kit. The flag only flew for two hours, when the Golani Brigade finally made it to Eilat and raised an official flag , but the ink-drawn flag will forever be remembered in the history of Israel’s rebirth. Today, a monument stands at the old Jordanian police headquarters where the episode happened, across from the city’s Mall Hayam. To learn more about the building of the modern State of Israel as envisaged by the prophets of the Bible check us out at @christian_jpost, on Facebook.com/jpostchristianworld/ and see the best of the Holy Land in The Jerusalem Post - Christian Edition monthly magazine.sign up to our newsletter