Allon, who would become commander-in-chief of the pre-independence military unit Palmach, began his army career during the Arab revolt in British Mandatory Palestine in the late 1930s. 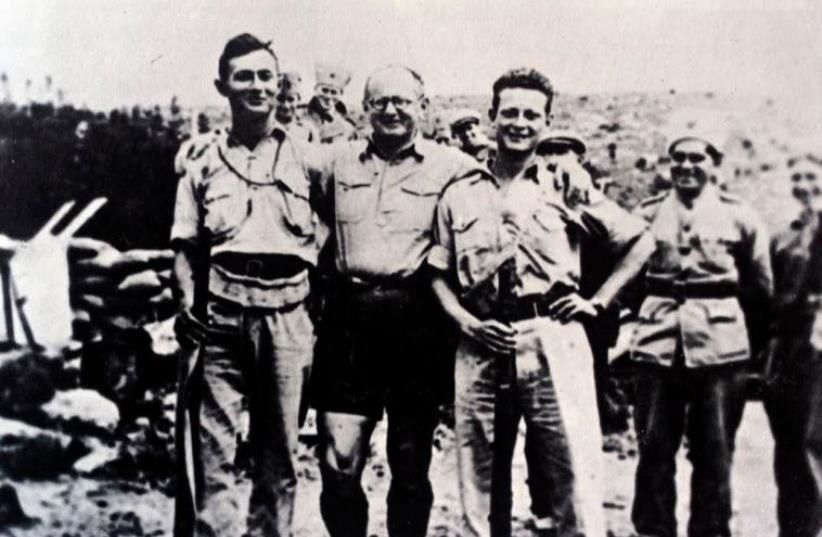 Future generals (left to right) Moshe Dayan, Yitzhak Sadeh and Yigal Allon, at Kibbutz Hanita in 1938
(photo credit: Wikimedia Commons)
Advertisement
On February 29, 1980, general and former acting prime minister Yigal Allon passed away at the age of 61. Born Yigal Peikowitz, in his youth, Allon played an active part in founding Kibbutz Ginosar on the western bank of the Sea of Galilee. In March 1937, he and a group of young social Zionists established the area as a “tower and stockade,” settlement, quickly building a guard tower with a fence around it in order to circumvent the British Mandate’s ruling that no new Jewish settlements could be built. The tower and stockade method also bypassed the Ottoman law, which was still in place, that said no illegal building may be demolished if the roof has been completed.Allon, who would become commander-in-chief of the pre-independence military unit Palmach, began his army career during the Arab revolt in British Mandatory Palestine in the late 1930s as a military policeman. He fought in the British-Jewish counter-insurgency unit Special Night Squads, and quickly rose up in the ranks after taking an squad commanders’ course.In 1941, he left the Hagana to help found the Palmach, and during his time in the “Strike Forces” unit, Allon fought alongside future IDF chiefs of general staff Moshe Dayan and Yitzhak Rabin. During the War of Independence in 1948, as the leader of the largest and strongest Jewish military unit at the time, Allon led the Palmach to major victories in Safed and the North, on the Egyptian border and in the Hebron Hills. After retiring from the military two years later, Allon entered politics being elected member of Knesset in 1955. From that time on, Allon served as minister of the Labor, Immigrant Absorption, Education and Culture and Foreign Affairs portfolios. After the death of prime minister Levi Eshkol, the country’s second prime minister, Allon served as interim prime minister for a total of 19 days until the Labor Party chose Gold Meir as its new leader. In a speech to the UN General Assembly on September 30, 1975 Alon summed up his the purpose of his career – establishing the modern State of Israel and defending her with all his might:“Zionism is the modern expression of the ancient Jewish heritage. Zionism is the national liberation movement of a people exiled from its historic homeland and dispersed among the nations of the world. Zionism is the redemption of an ancient nation from a tragic lot and the redemption of a land neglected for centuries. Zionism is the revival of an ancient language and culture, in which the vision of a universal peace has been a central theme... Zionism is, in sum, the constant and unrelenting effort to realize the national and universal vision of the prophets of Israel.”To learn more about the building of the modern State of Israel as envisaged by the prophets of the Bible check us out at @christian_jpost, on Facebook.com/jpostchristianworld/ and see the best of the Holy Land in The Jerusalem Post - Christian Edition monthly magazine.sign up to our newsletter