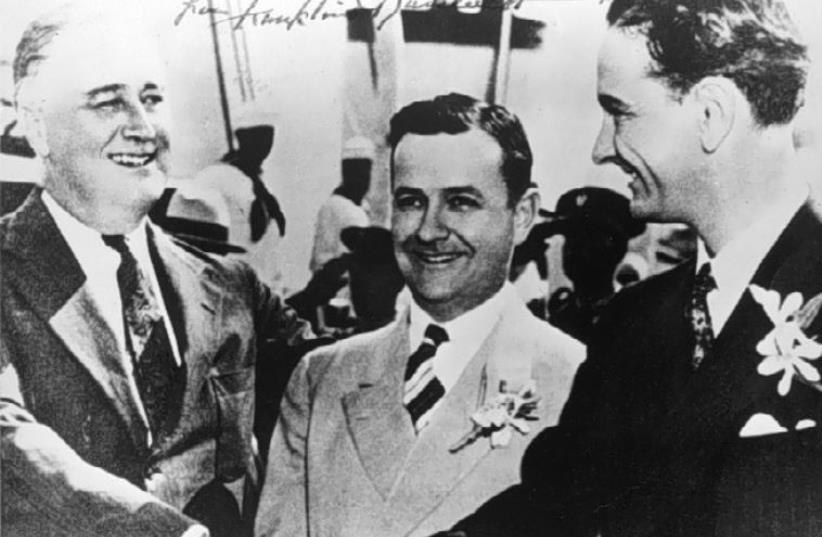 exas Gov. Allred (center) with President Franklin D. Roosevelt and Representative Lyndon B. Johnson in Galveston, Texas, on May 12, 1937.
(photo credit: Wikimedia Commons)
Advertisement
The love for Zion and God’s Chosen People can be found everywhere, even deep in the heart of Texas. At the end of the First World War, with the 1917 Balfour Declaration calling for the establishment of a national home for the Jewish people in the then-territory of Palestine, Jews and Evangelical Christians in Texas began fundraising to help the Zionist dream become a reality. On January 20, 1935, Texas Governor James Allred declared the day “Palestine Day,” to pay tribute to the ideals of justice that animated the nations of the earth, including our own, in approving the re-establishment of the Jewish homeland in Palestine,” as told in Stuart Rockoff’s “Deep in the Heart of Palestine: Zionism in Early Texas.” During the Depression, Texans raised more than $65,000, Rockoff writes.Also not widely known, while Jews were being persecuted by the Russian czars and later by Nazi Germany, Texas was a state ready and willing to take in their “older brothers.” Political bloggist Charles Kuffner in his blog on Texas politics gives the following summary:  “When Russia began a purge of Jews in 1888, a Texan named J.B. Brown offered to give 100 acres of land to each Jewish family who wanted to relocate to Motley County on the plains of West Texas. Similarly, in 1939, a search was made around Texas for land that might be purchased for the relocation of European Jews. The city of Plainview notified Governor James Allred that 46,000 acres could be made immediately available if needed. There’s no evidence that any families took these offers, but the offers were at least made.”Another little-known historical fact is Lyndon B. Johnson’s “Operation Texas.” In 1938, Johnson, then a congressman, helped Jewish refugees enter Texas via Mexico, Cuba and other South American countriesAuthor James M. Smallwoord writes in “Operation Texas: Lyndon B. Johnson, The Jewish Question and the Nazi Holocaust” that LBJ was acting under advice he received from his grandfather: “Take care of the Jews, God’s chosen people. Consider them your friends and help them any way you can.”

To learn more about the role of Christians in helping build the modern State of Israel – as envisaged by the prophets of the Bible – as well as the Jewish roots of Jesus, check us out at @christian_jpost, on Facebook.com/jpostchristianworld/ and see the best of the Holy Land in The Jerusalem Post - Christian Edition monthly magazine.sign up to our newsletter