Up Close: The first renovation of the Church of the Nativity in modern times

Giammarco Piacenti, scion of a family of restorers, brings new life to the Church of the Nativity. 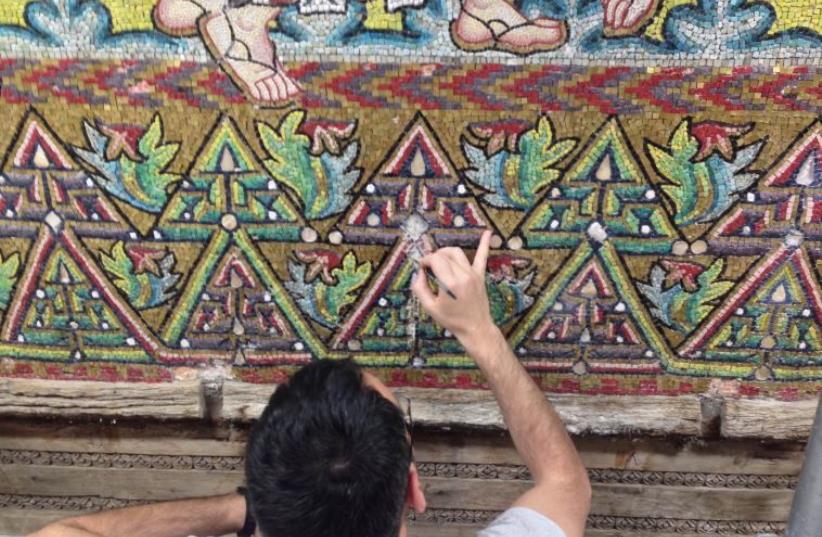 The restoration of the Church of the Nativity in Bethlehem
(photo credit: MEDIA LINE)
Advertisement
Covered in dust, Matteo, an artisan restorer, is perched some 30 feet in the air, crouching on a narrow metal catwalk leveled on solid wood scaffolding, intensely focused on a square the size of a thumbnail. With a slender brush, under a spotlight, he appears to touch up a petal.It may look like painstaking work on a minuscule canvas, but with every lick of his brush, Matteo and his twenty colleagues are holding firm against the tide of destruction washing over the region. A three-and-a-half-hour drive to the north, just beyond Israel’s border, the Islamic State (ISIS) has demolished the ancient metropolis of Palmyra with its temples, buildings and statues worthy of UNESCO world heritage status. Here in Bethlehem, in the Palestinian West Bank, the Italian Piacenti company is ensuring, stroke by stroke, that the heritage of this city remains intact. “Syrian artisans made this,” Giammarco Piacenti, the CEO of his family’s company and a fifth generation restorer, comments as he takes The Media Line on a unique tour into the darkest recesses of the Church of the Nativity, where Jesus was born, which is currently undergoing its first major restoration in the modern era. “This,” refers to the walls of the 1700-year-old basilica, that amazingly are lined with mosaics formed out of small glass squares highlighted by bright circles of mother-of-pearl and equally small hand-cut stones quarried out of local rock. The last time the church underwent a renovation was in 1479. In 2012, UNESCO declared it a World Heritage Site. In 2013, Palestinian Authority President Mahmoud Abbas (and the crumbling walls) prevailed upon squabbling church leaders to commission a refurbishment, and in 2013, the Piacenti team turned up, shrouding the interior in the thick plastic sheets that are still there today. Twenty-five wealthy individuals and interested states have funded the operation so far, but, at a cost so far of about $15 million dollars and no end in sight, the church has now opened its doors to pilgrims of a different sort. Last week in the Vatican, the Piacentis launched an Adopt-A-Column appeal for the restoration of 50 columns that are in danger of becoming decrepit. Speaking at the Vatican, the head of the Palestinian presidential restoration committee, Ziad al-Bandak, said that 2.3 million Euros was needed to fund the columns’ refurbishment. The appeal is open to governments, regions or individuals. Cecilia Sandroni, the Piacientis’ glamorous international public relations manager, who is working hard at publicizing the initiative, says with a laugh that somehow, “the money normally comes through.” Currently, they renovation of the holy site finds itself at a remarkable juncture. While the work of cleaning off a millennium of dirt, soot, dust and smoke has advanced sufficiently to stun, it has not yet advanced to the point when the scaffolding can be taken down and the artifacts can be viewed from the church’s humble stone floor. Climbing up two wooden ladders to a work area, cantering along the catwalk to a canvas-enveloped work area, Giammarco Piacenti lifts up a thick plastic sheet. The 1,500-year-old mosaics emerge like daylight before the eyes. “Glass doesn’t lose its color,” he explains. The restoration is not to replace missing stones -- “only if it disturbs the aesthetic” -- but to restore the grand experience of the original art. Jesus with a crown of thorns; a baby clambering up a palm tree; a modest but nonetheless breathtaking depiction of a mule braying as it trots down a stony path. Not only the brilliance but the depth of the mosaic’s artistry is brought to life. The church took 13 years to build and its original beams still stand -- or, rather, lie. They are carved into 52 pieces of cedar of Lebanon, representing the 52 weeks of the Justinian calendar. Yona Triestman, the owner and founder of Restorno, an Israeli restoration company, who was exposed to the Bethlehem project at a Tel Aviv conference, told The Media Line “they are doing an amazing thing there. It is restoration at the highest level. You very rarely see a project of that magnitude, of that importance or quality. It’s an amazing opportunity.” The mosaics are reminiscent of those found in Sicily, Ravenna and even Florence, Piacenti says, hinting at a possible sunny future for tourism to the beleaguered region. Although Bethlehem is suffering from a severe economic crisis resulting largely from the ongoing Israeli-Palestinian conflict, Pope Francis’ 2014 pilgrimage to the Holy Land included a visit to the Church of the Nativity and a sermon delivered to exultant masses in Manger Square that elevated hopes for a prosperous future for Christian tourism. The restoration project is an appropriate harbinger of the Pope’s vision.For more stories from The Media Line visit http://www.themedialine.org/
Sign up for our Christian World newsletter >>