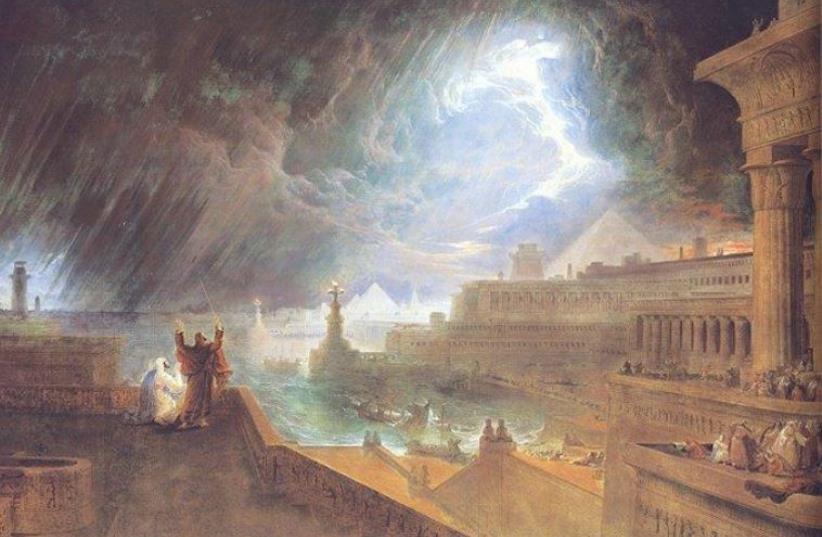 John Martin’s painting of the plague of hail and fire (1823)
(photo credit: Wikimedia Commons)
Advertisement
The weekly Torah reading is Parashat  “Va’era” (“And I appeared”) from Exodus 6:2 to 9:35. The Haftara reading is from the Book of Ezekiel 28:25-29:21.•God appears to Moses saying He will take out his nation from Egypt and bring them to the Land of Israel.
•The Torah recounts the lineage of the leaders of the nation, Moses and Aaron.
•God tells Moses that the Egyptians will know that He is the true Lord, when He stretches forth His hand upon Egypt and redeems the Israelites.
•Moses and Aaron appear before Pharaoh. After refusing to deliver the Israelites, Aaron delivers the first plague, Blood, followed by the Plague of Frogs.
•Aaron delivers the third plague, Lice. The Egyptian magicians can’t reproduce the plague, saying it is “the finger of God.” Pharaoh refuses to be convinced, and Moses tells him to prepare for another plague, Wild Animals.
•Pharaoh continues to harden his heart, and he bears through the plagues of Wild Animals, Diseased Livestock and Boils.
•Moses sends the Plague of Hail, with fire inside the pellets. The Israelites living in Goshen are saved from the plague.
In the Haftarah: Ezekiel prophesizes about the downfall of Egypt for failing to live up to its promise to stand by Israel in the period of the First Temple.

May we be blessed with a peaceful and restful Shabbat, with blessings from the Eternal City of Jerusalem. Peace be with Israel and her supporters.Shabbat Shalom!
To learn more about the Bible and the Jewish roots of Jesus, check us out on Twitter at @christian_jpost, on Facebook, and in our monthly Christian magazine, The Jerusalem Post - Christian Edition.sign up to our newsletter