Population and Immigration Authority said it is concerned these tourists will not return home. 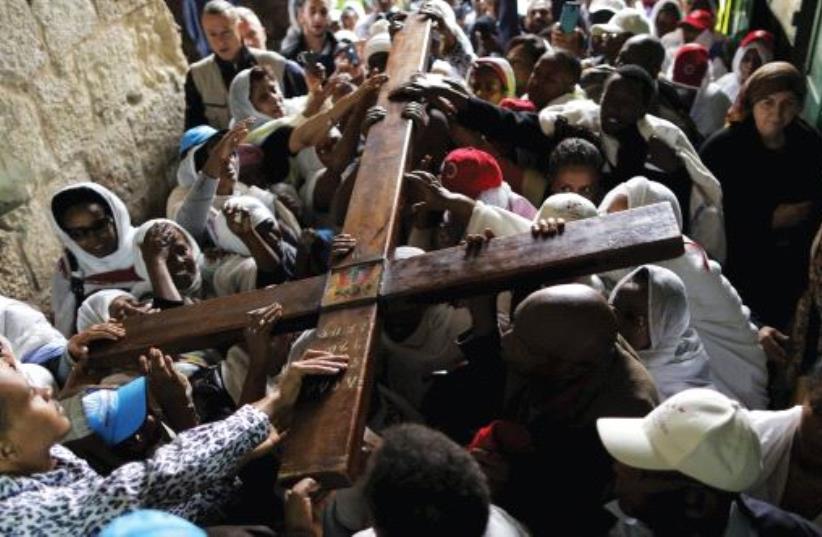 ETHIOPIAN CHRISTIAN worshipers carry a cross during a procession along Via Dolorosa
(photo credit: REUTERS)
Advertisement

Israel is reportedly banning entry of Ethiopian Christians who want to visit the country on pilgrimage missions for the upcoming Easter holiday for fear they will not return home, Israeli media reported earlier this week.

According to Channel 13, tour companies received a letter from Israel’s Population and Immigration Authority explaining that any Ethiopian traveler who wants to visit Israel will need to contact the authority personally and receive permission to enter.

Tourists from other countries do not have to follow this same protocol; tour companies can generally submit a group application for tourists traveling as a group.

The authority’s letter noted that the move was out of concern that “these tourists will not head back” due to the ongoing civil war in their country, Channel 13 said.  Israel’s Population and Immigration Authority said the policy was necessary because in the past Ethiopian tourists have overstayed, according to media reports.

The Tigray War began in November 2020.

In response to the decision, the head of Israel Incoming Tour Operators Association, Yossi Fatal, wrote a letter to Interior Minister Ayelet Shaked that was quoted in detail by the Hebrew tourism media outlet Passport News in which he said the decision by the authority effectively means “closing the gates of the State of Israel to tourists from Ethiopia, who want to come to pray in the holy places of Christianity” because the authority will not be able to handle the quantity of individual requests it will receive in time.

He said that, “the State of Israel has an international responsibility when it comes to everything related to the freedom of religious worship at the holy sites of the three religions, which are located within the borders of Israel… This important principle, which concerns the sanctity and status of Israel as the guardian of the holy sites of several religions in the world, has been trampled on by insensitivity and is detrimental to Israel's status and image in the world.”

Fatal claimed that he has already received dozens of scathing letters of complaint from Ethiopia, including from senior religious leaders, and that he expects Ethiopian government officials to contact Israeli authorities.

“Past experience shows that the directive not to allow religious worship in Israel for Christian believers will be abused by international entities,” Fatal wrote.