Father of Tariq Khdeir to 'JPost': Why did you beat him up like this?

Father of arrested teen, allegedly beaten by police, speaks as his son is released from custody with bail posted by MK Ahmed Tibi. 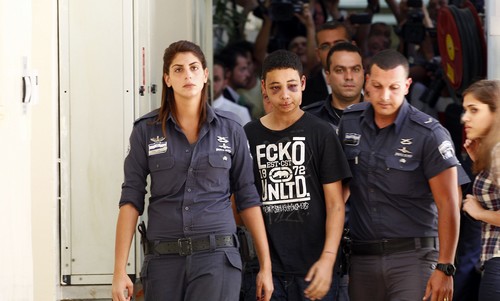 The father of Tariq Khdeir, the teen allegedly beaten by Israel Police, spoke to The Jerusalem Post regarding the situation surrounding his son's arrest on Friday."Everybody who sees the video would say 'This boy died' how he [was] beat up," Saleh Khdeir said. "If my son did wrong, or if he broke the law or not, why [did] you beat him up like this?"

Video: Eli Mandelbaum Khdeir said the beating happened while Tariq was walking through a village that is usually non-violent. He claimed police officers were hiding when they jumped out to attack and later arrest his son. A police spokesman said Tariq was one of six rioters caught and detained in the incident, three of whom were found to be carrying knives. The Jerusalem Magistrate's Court on Sunday ordered the conditional release of Tariq Khdeir, cousin of the murdered Palestinian boy Muhammed Abu Khdeir, pending an investigation into potential charges of assaulting police.It was reported that MK Ahmed Tibi (United Arab List-Ta'al) paid for Tariq's bail. The court spokesman's office refused to release all of the details of the hearing, noting that Tariq, 15, is a minor, but various media outlets mentioned that he may have thrown Molotov cocktails and stones at police and was involved in altercations with them. On the other side of the controversy and possibly overshadowing potential charges against Tariq, the Justice Ministry late Saturday night said it was opening an investigation into police officers beating Tariq after videos of the beating have gone viral.Tariq, a Palestinian-American from Tampa, Florida was allegedly beaten and detained by Israeli security forces while visiting the area with his family to mourn Muhammad's death.Muhammad was murdered on Wednesday in a suspected revenge attack following the discovery of the bodies of the three abducted Israeli teens.A video being circulated by human rights groups allegedly shows two Israeli police officers kicking and beating the high school student.Palestinian media published photos depicting a boy with a badly bruised face, whom they claim is Tariq.The director of the Council on American-Islamic Relations of Tampa told a local Florida television station that the video shows security forces "stomping on his face," and that Tariq had been detained in Jerusalem following his participation in riot.The police have said that the footage was "edited and biased," and that it "did not represent the scope of events."
Advertisement
Subscribe for our daily newsletter