On the ground, Northern Command has stocked up bases with week’s worth of food.

By YAAKOV LAPPIN
JANUARY 8, 2013 17:48
IAF fighter jet crew in the rain 370
(photo credit: IAF Spokesman's Office)
Advertisement
Despite the torrential rain and strong winds, the Israel Air Force is continuing to train its pilots and fighter jets are taking off and landing from air bases around the country.Due to the hazardous conditions, however, the IAF is holding frequent weather evaluations and, where necessary, changing its training plans, said Lt.- Col. Eran Baje, commander of the IAF’s Meteorological Center. The center is tasked with providing air bases with guidance on flight safety in line with weather conditions.Baje said the phones at the center are ringing constantly.On the other end are air force squadrons seeking weather forecasts for the coming hours, and ground forces wanting to know if they can hold drills in various areas.“This situation requires a lot of patience from us,” said Sec.-Lt. Eden Orzdel, forecast officer at the Meteorological Center. “We must be vigilant on behalf of the many aircraft in the skies,” she added.Icing up is the main risk for fighter jets, though they are able to thaw themselves.Meanwhile, on the ground, the IDF’s Northern Command has stocked bases with enough food to allow army chefs to prepare meals for a week without resupplies. 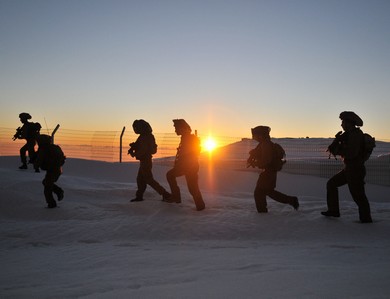 IDF soldiers operating in the snow [Photo: IDF SpokesmanThe IDF is working to keep roads open to its positions on Mount Dov, which is covered in snow, in order to allow equipment and food to reach soldiers.Soldiers from the Golani Brigade’s 51st Battalion have gone into full winter mode as they carry out their security mission in the freezing hills of the Upper Galilee, in the midst of a harsh winter storm that is battering Israel.The soldiers are wearing heavy winter gear, while their colleagues from the Engineering and Logistics Corpses on the Lebanese border are working overtime to prevent equipment malfunction.Maj. Sharon Ozolai, an engineering officer stationed on the northern border, said every soldier has been given a storm suit, a snowsuit and warm gloves.Dotan Bakvani, a logistics officer who is also deployed to the Lebanese border, said, “Every post in the brigade has either central heating or radiators.”Military bulldozers and salt trucks have been travelling up and down roads in the area, in order to melt any ice.The IDF’s Southern Command has, in the meantime, prepared its forces for flooding in the Arava region