By YAAKOV LAPPIN, JPOST.COM STAFF
NOVEMBER 23, 2011 23:59
IDF soldiers in desert exercise 311
(photo credit: Marc Israel Sellem)
Advertisement
The IDF announced Thursday morning that will launch a full investigation into Wednesday night's incidents along the Israeli-Egyptian border. Also Thursday morning, Home Front Defense Minister Matan Vilnai said that the IDF acted appropriately when they identified and engaged Beduin smugglers trying to cross illegally into Israel from Egypt. The smugglers returned to Egypt after a firefight with with Israeli soldiers. No IDF soldiers were injured in the clash.RELATED:
Analysis: Unrest mars Egypt army's once-sterling image
Barak supports Egypt’s maneuvers in SinaiThe smugglers were then identified by Egyptian security forces on the southern side of the border. A second firefight erupted between them, resulting in the deaths of two Egyptian security officers, according to Army Radio.

The two incidents apparently took place 400 meters apart from each other. Israeli forces later recovered a Kalashnikov and a pistol from the area. 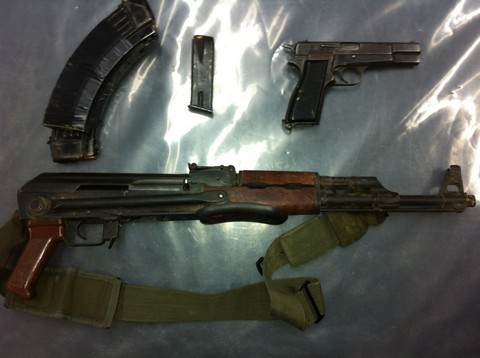 weapons apprehended from Sinai smugglers [Courtesy]
In an interview with Israel Radio Thursday morning, Vilnai noted that Beduin smugglers attempting to infiltrate the Israeli border is a regular occurrence. When asked whether Israel should deploy more soldiers on the border with Sinai, Vilnai responded that "we always lack soldiers near Sinai.""It's like money," the home front defense minister said. "We could always use more."Vilnai failed to say whether these specific incidents would have a negative impact on Israeli relations with Egypt.According to Vilnai, the Arab Spring revolution that overthrew Hosni Mubarak, and which may pave the way for an Egyptian government heavily influenced by Islamist groups such as the Muslim Brotherhood, guarantees that relations with Israel will never be "what they once were."He warned, however, that Israel, the US, or any other foreign party should not attempt to intervene in internal Egyptian affairs. Such intervention, Vilani said, would be a "bad mistake."
Advertisement
Subscribe for our daily newsletter