By YAAKOV LAPPIN
MARCH 8, 2014 17:36
IDF Navy escorting the Klos-C to the Port of Eilat.
(photo credit: IDF SPOKESMAN'S OFFICE)
Advertisement
Israel Navy ships brought a commercial vessel found carrying powerful Iranian rockets to Eilat Port on Saturday evening.The IDF is to carry out a close inspection of the ship and study the weapons on board, which were destined for the Gaza Strip. 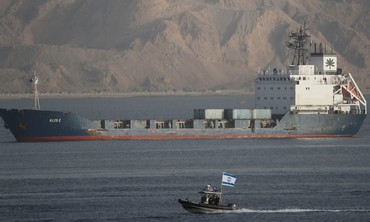 Israeli navy boat escorts Klos-C into Eilat port.
Three days after the navy raided the Klos-C in the Red Sea, some 150 km. from Port Sudan and 1,500 km. from Israel, the ship docked in Eilat. Two missile ships – the INS Hetz and INS Hanit – and naval commandos from the elite Flotilla 13 unit accompanied it.The Klos-C had sailed under a Panamanian flag, but it pulled into the southern port with Israeli and Israel Navy flags flying from its masts instead.The IDF will carefully unload crates containing dozens of Syrian-produced M-302 rockets and search the vessel for additional weapons. 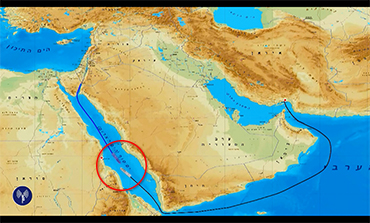 Map of location of IDF weapon capture.On Friday evening, Defense Minister Moshe Ya’alon spoke with US Secretary of Defense Chuck Hagel, and provided him with an update on the interception of the Iranian arms shipment.The operation was “very successful, and the result of a long and combined intelligence effort, as well as the great skill of the IDF,” Ya’alon told his US counterpart. The interception provided additional proof of Iran’s program to fund and arm terrorist elements, he added.Ya’alon and Hagel agreed to meet in Israel soon. IDF Chief of Staff Lt.-Gen. Benny Gantz met Saturday with the navy commandos who took part in the interdiction of the ship."All of the rockets that were found on the ship represents a security challenge for Israel and for its citizens, but for every bullet and rocket we have a return address," Gantz told the soldiers. 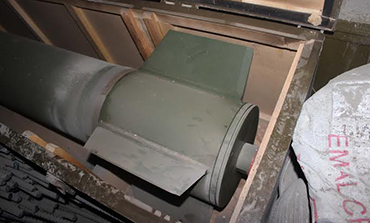 Iranian weapons captured en route to Gaza.
En route to Israel, the ship’s Turkish captain and 16 crew members of various nationalities told navy personnel their vessel had entered the Iranian port of Bander Abbas and loaded crates without knowing that rockets were inside.They said they had then moved on to the Iraqi port of Umm Qasr, where cement sacks were loaded onto the vessel.The cement sacks were used in an Iranian attempt to hide the crates containing the rockets, Israel said last week.“The captain felt cheated; he didn’t know he was part of a conspiracy, part of an Iranian operation,” one security source said.When the ship was intercepted, it was heading for Port Sudan, where the Islamic Republic’s Quds Force planned to take possession of the rockets and move them on land to Egypt and then into the Gaza Strip through smuggling tunnels, the IDF suspects.According to Military Intelligence, Iran initially flew the rockets from Syria to an Iranian airfield months ago, before trucking them to Bander Abbas, where they were loaded onto Klos-C.Islamic Jihad was an intended recipient of the rockets, and some may have been destined for Hamas.The M-302 rockets have a range of between 90 and 190 kilometers, depending on the model type, and their arrival in Gaza would have boosted the ability of terrorist groups to attack southern and central Israel.Last week, a security source said he could not rule out that the Iranians would “hold in-depth investigations [into the shipment’s discovery]. It’s not the first time this has been done to them,” he said.“This will stop their activities for several months,” he added.“Until you find the source of the leak, you have no confidence that the next shipment won’t share the same fate.”But eventually, Iran would try to send weapons.
Advertisement
Subscribe for our daily newsletter