Liberman in response to rocket attack: Israel should take over Gaza

Netanyahu vows Israel will continue to hit hard at those trying to attack; US condemns onslaught of rocket fire from Gaza. 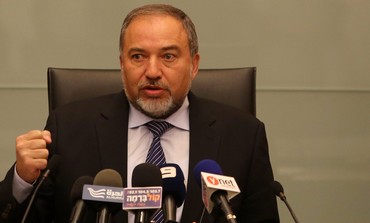 Foreign Minister Avigdor LibermanPrime Minister Binyamin Netanyahu convened the security cabinet on Thursday to discuss the barrage of rocket attacks from Gaza, and at least one member – Foreign Minister Avigdor Liberman – is calling for Israel to retake the Strip.Liberman, in a post on his Facebook page on Thursday, said the geopolitical situation was ripe for such a move, since Egypt recently outlawed Hamas and shut down smuggling tunnels.“Egypt, no less than Israel, has an interest in restoring order in Gaza in order to end the situation whereby Gaza is a basis of weapons and terror for Sinai, and also a refuge for terrorists operating there,” he wrote. “The only solution to this situation of an endless cycle of violence is the reoccupation of Gaza, and cleaning out the stables there.”After cleaning the stables, Liberman said, an agreement will need to be worked out with Cairo to allow the continuation of normal life in the south of Israel and in Gaza.He explained that the IDF’s limited military operations over the past few years – Operation Cast Lead in 2008- 2009 and Pillar of Defense in 2012 – have bought only periods of limited quiet, which Hamas has used to significantly build up its military capacity.“Limited operations and trying to control what happens inside Gaza from a distance is not the way to deal with terrorism from Gaza,” he said. “The terrorists are taking advantage of our commitment to humane values as they store and manufacture missiles in mosques, kindergartens, schools, clinics and ground floor apartments in high rise buildings, from where they also shoot them.”Israel, Liberman said, cannot live with a situation whereby land it evacuated is used by terrorists to indiscriminately fire rockets on its innocent civilians.No statement was issued following the security cabinet meeting. One government official said only that if there will not be quiet in the South, there will not be quiet in Gaza Netanyahu, meanwhile, called for Palestinian Authority President Mahmoud Abbas to condemn the indiscriminate rocket firing, just prior to Abbas meeting visiting British Prime Minister David Cameron in Bethlehem.Netanyahu, who visited the pharmaceutical giant Teva Pharmaceutical Industries’s headquarters in Jerusalem with Cameron, said that at a time when Teva’s plant in Ashdod was manufacturing medicine that is transferred to the Gaza Strip, “they are firing rockets from there on innocent Israelis.”“Our policy in the south is clear,” Netanyahu said. “We will strike at anyone who tries to harm us and will respond with great force to every attack. I would like to make it clear that whoever tries to attack our Purim celebrations – we will hit them strongly,” he said, crediting this policy for the relative quiet that the south has enjoyed in recent years.Meanwhile, EU foreign policy chief Catherine Ashton, whom Netanyahu chided earlier this week for not condemning the Iranians for trying to smuggle missiles into the Gaza Strip on the intercepted Klos-C cargo ship, condemned the rocket attacks.She stressed that Islamic Jihad, which claimed responsibility for the attacks, is listed by the EU as a terrorist organization.“There can be absolutely no justification for the deliberate targeting of innocent civilians, and I call for an immediate end to such acts,” she said.The EU “urges maximum restraint in order to prevent a further escalation and calls for an end to all violence,” Ashton said. She also expressed “regret” for “the recent incidents that led to the loss of life in the West Bank.”