'With a bullet’s whistle I lost you, the love of my life' 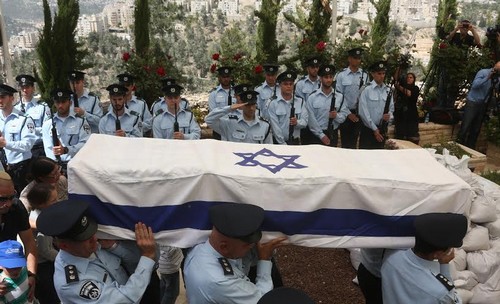 “With a bullet’s whistle I lost you, the love of my life,” Hadas Mizrahi said before hundreds of mourners at the Mount Herzl Military Cemetery on Wednesday as she eulogized her husband, Baruch, 47, who was killed in a pre-Passover terror attack two days earlier.Hadas, who was also wounded in the attack, was released briefly from the Shaare Zedek Medical Center, just a few meters down the road, to attend the funeral. A white plastic hospital bracelet hung on her wrist as she spoke. 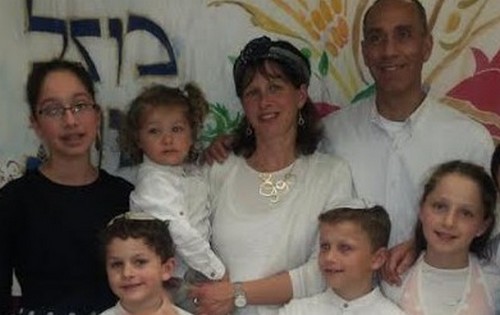 Earlier in the day, wearing a hospital gown and sitting in a wheelchair, she told reporters that in the last seconds before his death, her husband saved her life and that of their four children.Their fifth child was not in the car with them as they traveled late Monday afternoon from their home in Modi’in to her parents’ house in Kiryat Arba for the Seder.As the family drove along Route 35 in the West Bank, Baruch saw a man with a gun on the side of the road.“Look,” Baruch told her, “there is a terrorist shooting.”These were his last words to her. Immediately he pressed his foot on the gas pedal as the terrorist sprayed their car with bullets.Video: Tovah Lazaroff
A bullet instantly killed her husband, but his foot remained on the pedal, and as his slumped body fell on her she understood that he had been killed. A bullet hit her and then another one hit him, she recalled.“Had the car been stationary, we all would have died,” she said.Although she was wounded and bleeding, she managed to grasp the car’s steering wheel as it zigzagged across the road.She gained control of the wheel and yelled at her children to take off their seat belts and lie on the floor of the car to escape the bullets.Only once she felt they had traveled a safe distance did she stop the car, and then used her cellphone to call for help.Her children didn’t immediately understand that their father had died, Hadas said. In the car they yelled at him: “‘Abba [father], wake up.’ That tore me up.My daughter said, ‘Abba what happened, why aren’t you answering?’” Since then, Hadas said, they ask, “Where is Abba?” Hadas said that in the car she wanted to reassure her children but not deceive them. 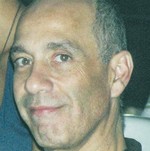 Instead of speaking of Baruch she spoke only about herself, telling them, “I’m here and I’m fine.”When rescue personnel arrived she asked the medics and security personnel to remove her children first, so that they would not see that she was wounded. They were taken to her parents’ home. One of her sons, Itai, aged eight-and-a-half, was lightly wounded, she said. He was treated briefly in a hospital and then returned to Kiryat Arba.Of Baruch, she recalled: “We were together for 20 years. He was a wonderful father. He always found time to be with the children.”She then described how he came home early once a week to see them.“On Wednesday he went with us to the safari; it was our last trip. On Sunday night we went with the children to visit his mother and that was his last visit to her,” she said.It was the thought of her five children that has given her the strength to push forward, she said.“I want to bring up my children so they will finish their studies, serve in the army and get married,” she said.Hadas called on the prime minister to “stop releasing terrorists here; another family has been destroyed and we do not want another family to be destroyed.”When she finished talking at the hospital, she burst briefly into tears.At the funeral as she told the mourners that she and her husband were supposed to “grow old together” and enjoy a “tranquil life” and the “changing of season.”“Who,” she asked, “will help me raise the children? Who will teach them honesty? Who will offer them endless love and be the example to them that you were?” “Twenty years of love and unity have ended,” she said. “My beloved, our children will still grow in the lap of love for mankind and for the country. You will still be with us. I am parting from you with my body but not my soul.”

Video courtesy United Hatzalah Judea and Samaria
As he said good-bye to his father, Itai said Kaddish, the traditional prayer for the dead, in a tear-filled voice.Baruch Mizrahi served in the IDF for 25 years and until 2011 was a lieutenant-colonel in the 8200 intelligence unit. Since then he held a senior intelligence position in the Israel Police and was in charge of tracking organized crime.Wearing blue uniforms, police officers carried Mizrahi’s flag-draped coffin into the cemetery and lowered it into the grave.Police Insp.-Gen. Yohanan Danino spoke of him as a highly respected and admired professional who was diligent and highly motivated. 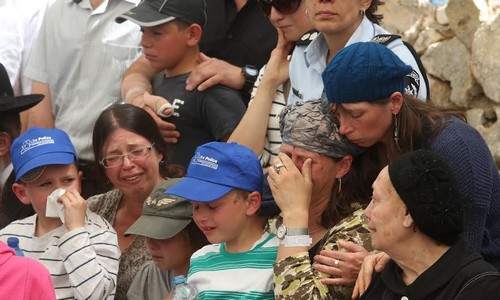 He said he was humble and wise and excelled as a leader.In his last days Mizrahi was in charge of technological reforms to place the department on par with national and international standards, Danino said.“Your contributions will stay with us for many years,” he said of Mizrahi. He added that the police would do everything in their power to find his killers.President Shimon Peres spoke on Wednesday night with Hadas Mizrahi and offered condolences on his behalf and on behalf of the nation.“I know your heart is broken. The hearts of all the people are broken over your loss.Baruch was a wonderful man who excelled in everything he did and in everything that he passed on to your children. He was the quiet pride of the nation, and always put the needs of others ahead of his own. But this time it was you who saved your children.I am certain that you will be strong for Baruch and raise your children in the way that he would have wanted – with honesty and integrity,” said the president.Greer Fay Cashman contributed to this report.
Advertisement
Subscribe for our daily newsletter