Husam El-Qoulaq's comment at an April 14 panel event on the Israel-Palestinian conflict was condemned by Harvard Law dean Martha Minow, the Jewish Law Students Association, and others. 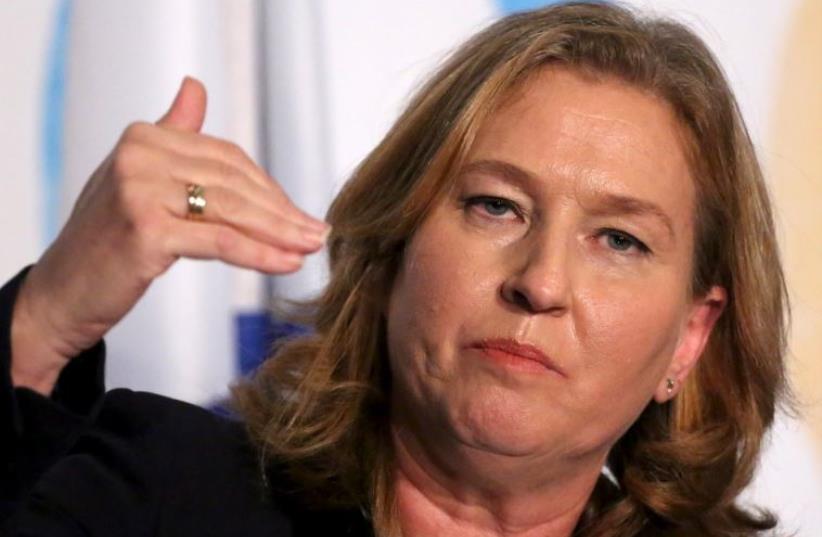 Former foreign minister Tzipi Livni of the Zionist Union addresses a conference in New York
(photo credit: REUTERS)
Advertisement
Eleven Jewish students and recent alumni of the Harvard Law School have signed a letter defending the law student who asked former Israeli Foreign Minister Tzipi Livni why she is “so smelly.”In a letter to the Harvard Law Record, the students defend “our friend and peer” Husam El-Qoulaq, whose comment at an April 14 panel event on the Israel-Palestinian conflict was condemned by Harvard Law dean Martha Minow, the Jewish Law Students Association and others, with many saying it evoked an anti-Semitic stereotype.Qoulaq, whose identity was not made public until this week, last week saying he had not intended to be anti-Semitic and was “entirely unaware” of any stereotypes about Jews being smelly. The apology did not explain what he had intended to convey, however, nor did it acknowledge that whether anti-Semitic or not, calling a panelist “smelly” is generally considered impolite.The incident comes at a time when speeches by Israelis on campuses throughout North America and in the United Kingdom are frequently disrupted by anti-Israel protesters. Many campus activists are calling for universities to boycott or divest from Israel. It also comes amid fierce debate as to whether anti-Zionism is inherently anti-Semitic or is merely legitimate criticism of the Jewish state.In their letter published Monday, which had garnered 84 comments by midday Tuesday, the 11 supporters of El-Qoulaq say their friend is the “target of a vicious smear campaign,” with people on the Internet threatening “various forms of violence” against him.“These tactics are part of a sadly well-worn playbook aimed at discrediting and defaming those who dare challenge Israel’s abuses against Palestinians,” they continue.The letter indicates that El-Quolaq meant his remarks as an attack on Livni for her “key role” in “Operation Cast Lead, a 23-day military operation that was condemned … for the brutality it visited upon Palestinian civilians.” Israel launched that operation, which took place from Dec. 27, 2008 to Jan. 18, 2009, in response to repeated rocket fire from Hamas targeting Israeli civilians.“Over the years, we’ve seen Husam experiment with many forms of engagement on this issue, from handing out informational fliers to asking pointed substantive questions at events,” the letter continues. “Earlier this semester he tried a different tactic, calling a male Palestinian speaker a ‘smelly liar.’”Acknowledging that El-Qoulaq’s words could be seen as “disrespectful, reckless or inappropriate,” the students insisted “his aim was more mischief than malice.”Further excusing him, the letter notes that El-Qoulaq “is one of a small handful of Palestinians on a campus where the prevailing sentiment is to back Israeli actions that he - along with much of the rest of the world - views as war crimes against his people.”During the April 14 panel event involving Livni and American diplomat Dennis Ross, El-Qoulaq asked Livni, “How is it that you are so smelly?” Asked by the moderator to clarify his question, he said his question was “about the odor of Tzipi Livni, very smelly.”